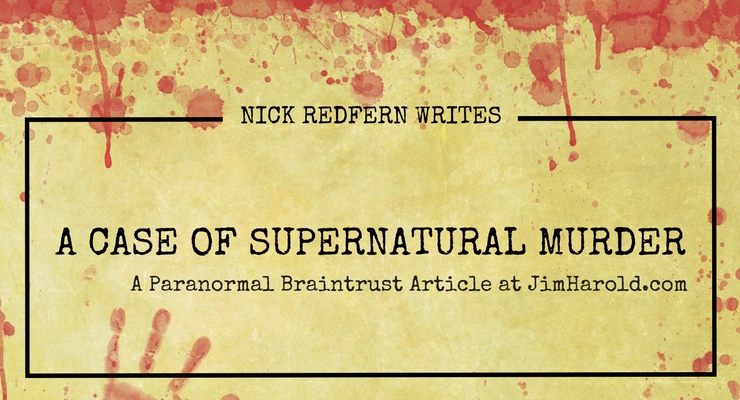 February 14, 1945 was the date of a very controversial, and still-unresolved, murder in rural England. It was a murder which bore all the hallmarks of death at the hands of a secret society. Some observers of the mystery suggested that a band of witches were the culprits. Others, meanwhile, were of the opinion that it was all the work of a secret sect of druids. The victim was a farm-worker, 74-year-old Charles Walton, found dead with nothing less than a pitchfork sticking out of his chest.

He was a resident of a small, picturesque village in the county of Warwickshire, England called Lower Quinton. Walton had lived in the village for all of his life, in a pleasant old cottage that stood across from the local church. It was a scene not unlike what one might expect to see on Downton Abbey or in the pages of a Jane Austen novel. Until, that is, murder, mayhem, and a secret cult came to Lower Quinton and turned everything on its collective head.

Walton was known to all of the locals. He was viewed as an affable but quiet sort, and – somewhat intriguingly – he had the ability to entice wild birds to eat seeds from his hands. He was also said to have the power to reduce a wild, aggressive dog to a man’s best friend simply by speaking to it. On top of that, he had expert knowledge of local folklore, mythology and legend. Rumors suggest that perhaps Walton’s slightly uncanny “powers” had ensured him a place in a secret witchcraft cult, one which he ultimately fell out of favor with. And, as a result, he paid the ultimate price. Namely, his life.

What is known for sure is that on the day in question – which was Valentine’s Day, no less – Walton was busily trimming hedges on what was known as Hillground: a large field at the foot of the Meon Hill. His tools were a hook and a pitchfork. It was while working on the hedges that someone stealthily intervened and took Walton’s life – and in a distinctly savage fashion, too. When his body was stumbled on by a shocked local, all hell broke loose in the small village. He was lying dead on the grassy ground, with the pitchfork having fatally pierced his chest, and the hook having pierced his throat in what was clearly a savage and violent fashion. On top of that, a large cross had been cut into his chest. Clearly, something distinctly sinister had taken place.

It should be noted that Meon Hill has, for centuries, been associated with supernatural activity: sightings of blazing-eyed black dogs – not unlike the terrible beast in Sir Arthur Conan Doyle’s classic novel The Hound of the Baskervilles – have been reported. And, none other than Satan himself is said to have kicked a large rock from the top of the hill to the bottom of it, with the intention of flattening Evesham Abbey.

Such was the strange and sinister nature of Walton’s death, the investigation wasn’t just left in the hands of the local “bobbies.” None other than Scotland Yard’s finest detectives were soon on the case – which is hardly surprising, when one takes into consideration the extreme weirdness of the entire affair. And they weren’t just on the case; they took over the entire investigation, under the control of Detective Inspector Robert Fabian. Despite an extensive investigation, and suspicions that the guilty party was a man named Albert Potter – who was employing Walton on the day he met his grisly end – the matter was never resolved to the satisfaction of the police and the mystery remained precisely that: a mystery.

It’s worth noting, however, that Detective Inspector Fabian later said of his investigation of the affair: “One of my most memorable murder cases was at the village of Lower Quinton, near the stone Druid circle of the Whispering Knights. There a man had been killed by a reproduction of a Druidical ceremony on St. Valentine’s Eve.”

He also offered the following, memorable words: “I advise anybody who is tempted at any time to venture into Black Magic, witchcraft, Shamanism – call it what you will – to remember Charles Walton and to think of his death, which was clearly the ghastly climax of a pagan rite. There is no stronger argument for keeping as far away as possible from the villains with their swords, incense and mumbo-jumbo. It is prudence on which your future peace of mind and even your life could depend.”

It should also be noted that within Lower Quinton, the village folk are still very reluctant to speak about the decades-old affair. For example, the landlord of the village’s College Arms pub, told the BBC: “I can’t talk to you about that. After 17 years of running this place I know there are some things we don’t talk about. Talking about it would upset people and there’s no sense in alienating people in a small village like this. There are no relatives of Charles Walton left in the village and people that might have known what happened are all dead or gone.”

Another local was equally reluctant to say much to the BBC: “People don’t talk about it; it’s a closed subject. Those that know about it are gone, except one who’s in hospital and another that’s in a nursing home. All the others have gone or passed away.”

And a third spoke in a similar vein and tones: “No one will talk to you about it. The family have all gone now, anyway. There are none of the Walton family left here now. I have no answers to your questions.”

Death by pitchfork, rumors of a witchcraft cult, druids roaming around the landscape, and a village of people still living in uneasy and closed-mouth fashion, decades later. The memories of the murder of Charles Walton show no signs of fading away anytime soon. Indeed, that strange atmosphere of witchcraft, ritualistic murder, and sinister characters still hangs over Lower Quinton. In all probability, that will always be the case.