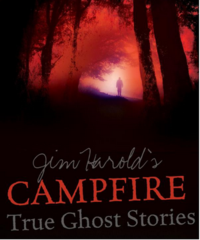 Some time ago, we had put out a call for an essays to be considered for Jim Harold’s Campfire: True Ghost Stories.  We received a lot of great entries but the winner was “Herman” by Janese.  Here it is for your edification. Prepare to be freaked out, thanks Janese!

About eight years ago, I had an experience I’ll never forget. I was 22 years old, a military wife and a new mother. My husband was deployed, so my 11 month old daughter and I were living with my grandparents. Both of my grandparents were in failing health so it worked out for us all. The house was only about 50 years old, having been built by my grandfather in the 1960s. My daughter and I shared a bedroom in the finished basement of the house.

I am no stranger to the paranormal. My mother has a farmhouse a few miles away from my grandparents. The house is nearly 200 years old and we have had many paranormal experiences. Everything from levitating objects to disappearing/reappearing objects. Cold spots, footsteps, music that has no source, full body apparitions – all of these and more became routine growing up on the farm. The paranormal doesn’t shake me, it does make me more interested to find out the truth, however.

One clear summer night, I was lying in bed, not yet asleep. My daughter was in her crib a few feet from my bed. The top 3 feet or so of the basement was above ground, windows high up on the walls allowing for the moonlight to shine in the room. The windows were open, it was a warm night that is typical for early summer in the Pennsylvania countryside.

Suddenly, I became aware of a very uncomfortable feeling. I couldn’t quite establish what this feeling was, just that I was feeling very, very uneasy. I glanced down toward the bottom of the bed and saw what I thought was my daughter toddling along the bottom of the bed. I could only see the shadow of the top of her head and I remember thinking that she must have crawled out of her crib and was coming to get in bed with me. I smiled and laid my head back down, waiting for her to come to the side of the bed. I felt her grab the bedspread to pull herself up on top of the bed and I thought I would give her a little help. When I tried to reach over to the side of the bed though, I found I was unable to move. My first reaction was that this was very strange but as the seconds passed, I still couldn’t move. I could feel her tugging on the bedcovers, climbing up the side and I became alarmed, thinking I was having a stroke or seizure…any explanation for my sudden paralysis. Just then, the little figure made it up and crawled over to me and I fought a panic I’ve never felt before. It was not my daughter. It was not human at all. I don’t know what exactly it was but it was roughly 24” tall, greenish-brown and resembled what I can only describe as “Yoda.” I was in full-blown panic and I could feel my heart pounding, my breath heaving and I was shaking like a leaf. This “thing” crawled up onto my chest and sat down, cross-legged, and just studied my face. I still couldn’t move, couldn’t make a sound. I remember feeling my heart beating harder and harder. My breath was coming faster and faster and I began to think that if this continued, I was going to go into cardiac arrest. I have no idea how long it sat on me, just looking at me with a quizzical expression, 30 seconds, maybe a few minutes….it felt like an eternity.

Just when I thought that my heart was going to hammer right out of my chest, the little figure got a sudden look of complete surprise on his face. He never sad a word but I distinctly felt him send a wave of emotion over me. It was as if he was telepathically apologizing for frightening me to such a degree and he didn’t mean to scare me. With that, he hopped up, jumped off the bed and scampered out the door of the bedroom. Instantly, I could move and I flew out of bed. I grabbed my still sleeping daughter out of her crib and ran with everything I had out through the apartment and up the stairs to the main house, flipping on every light I passed.

I spent the night in the recliner upstairs that night with the lights on, my daughter curled happily in my arms. For the next 6 months, I slept with all the lights blazing in the apartment at night. I figured if I gave it a silly, non-threatening name, I could make it a little less scary. Each night before bed, I would stop at my bedroom door, look around the apartment and say “No visits tonight, Herman.” It helped….a little.

I still don’t know what it was. He’s never returned and for that , I’m glad. I have never experienced anything like it before or since. I have been through some pretty distressing situations in my life but I’ve never been so afraid of anything.