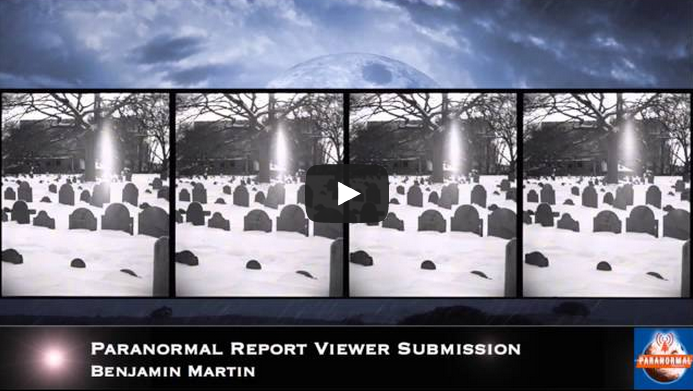 As part of The Paranormal Report weekly video podcast that I co-host with Micah Hanks, we receive great user submissions of ghost, UFO and cryptid video.  This one has to be the best yet. Professional photographer Benjamin Martin of New York sent us the following photo featured in the short video below.  It is simply amazing, check it out.  Thanks Benjamin!

Below is an excerpt from Benjamin’s original email to me on the photo:

In February 2014, I surprised my longtime girlfriend with a bit of an offbeat valentine’s day weekend trip to Salem, Massachusetts…

As you can imagine, I have several cameras both digital and film and love to shoot on both mediums. I brought along a somewhat novel 35mm camera that I have loved to experiment with as a B camera. It is called a lenticular camera and has four lenses across the front firing all four at once across what would otherwise be 2 standard 35mm frames.

It ended up being a few weeks before I was able to drop off and pick up the rolls of film that I had shot in Salem. Excited to see the photos, I stretched the film out on a light table right there at the lab. When I came across the following images, I had a visceral experience that I can only liken to doors of perception thrown open.

Since then, I have gone over every possible technical aberration with other Professional photographers and experts (light leak, sun flare, processing error, etc.)
and it has left us all stumped!

I have included a raw scan of the film as well as one that I have adjusted for exposure and removed dust for reference. If you know anyone that has any explanation for this, or has seen something similar, in Salem or elsewhere please let me know! Other than a handful of friends and colleagues, no one has seen these images, and only myself and my Father have bore witness to all four frames of the uncut film.
I’ve been listening to your shows for the last 2 years or so and love what you do. I never thought that I’d be sending you something like this!

If you enjoyed this video, check out the full length weekly Paranormal Report program on iTunes, at JimHarold.com, GralienReport.com or subscribe to our YouTube channel HERE.

You can send your own submissions to paranormalpodcastATgmail.com or infoATmicahhanks.com