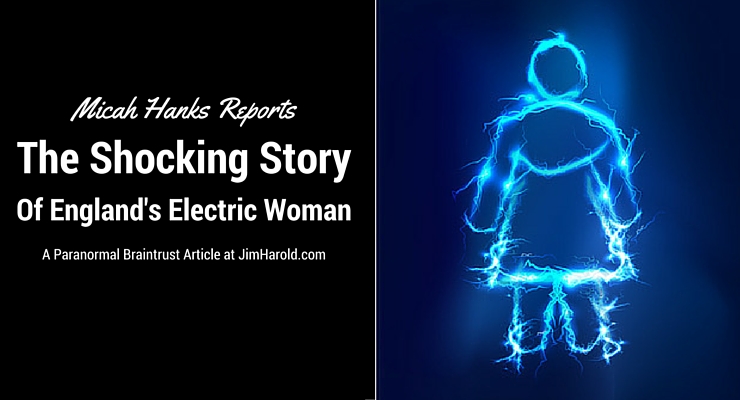 For years, many have claimed to have been afflicted by unusual electrical phenomenon. Among the complaints of such individuals, common threads that appear include watches stopping, interference with televisions and radios, and certain appliances ceasing to work altogether. Some consider this to be an unusual natural phenomenon, while others believe that the ability to affect electrical appliances might represent something else, and perhaps even otherworldly.

Although a number of stories of individuals with such strange abilities have been reported over the years, one incident does stand out among them. It is the story of Jacqueline Priestman, an English woman whose strange experiences with electrical devices had once caused her to believe in otherworldly forces acting upon her… and circumstances which led to suffering that nearly claimed her life.

The strange experience that would mark the beginning of Jacqueline Preistman’s trouble occurred in 1980, in the English town of Stockport, Manchester, where she lived with her husband, Ron. Jacqueline, as Ron knew all too well, was occasionally prone to fits of anger, but this time things seemed different. They had been in the midst of a heated argument, and just before he left their home on his scooter, this still angry Jacqueline called after him shouting, “I hope you break your neck!”

As he sped away on his scooter, neither Ron, nor Jacqueline would have imagined that he would be involved in an accident later that same day, in which his spine and neck had been broken in multiple areas. Sadly, Ron would never recover; he passed away due to complications from the injuries within weeks of the accident, leaving Jacqueline with a harsh reminder of the power of words; whether or not anything she said had affected her late husband’s fate, she knew she would have to live with what she said regardless.

This was only the beginning of Jacqueline’s troubles, though. As she began to adjust to living alone, it was around this time that strange occurrences began to happen around her home. Things came to a head one afternoon, when a lightbulb in her bathroom exploded above her while she was bathing, showering her with broken glass and injuring her arm.

“My arm was badly cut,” Jacqueline remembered of the incident. “I still have the scar, but I put it down to a faulty bulb.”

Within days of the incident with the lightbulb, her vacuum cleaner burned out as well, and a repairman who visited said he could find no cause for the apparent malfunction. With time, additional incidents involving exploding lightbulbs would suggest there had been more at play here; she had chalked the first one up to being faulty, but could all of the bulbs she kept buying have been from the same “bad” batch?

The problems weren’t relegated to things happening in her home. Even when Jacqueline went to restaurants or grocery stores, lights would go out in fixtures she came into contact with. “Some freezer shops and supermarkets even tried to stop me going in, in case I blasted their machinery,” Jacqueline told the New Straits Times in 1985.

Throughout the maddening ordeal, Jacqueline couldn’t shake the sense that this strange activity — or curse, depending on how one chose to see it — had been connected with Ron’s death. “When I think about it now, that was the trigger that changed my life,” Jacqueline remembered. “I suppose my own guilt prevented me from crying, but the internal strain was tremendous. Ron even joked as he lay in his hospital bed that if he died, he would come back and haunt me.”

With time, Jacqueline actually began to consider that she was being haunted by the ghost of her dead husband. His spirit, she reckoned, might be tormenting her by interfering with electrical appliances around her, just as he had joked he might do before his death.

One day, as she passed a particular cupboard where Ron had kept a number of his possessions, another lightbulb exploded violently above her, frightening her and her infant child. Jacqueline shouted aloud, Ron, what do you want? “I was convinced it was his ghost,” she said of the incident, “but I daren’t tell anyone else.”

Eventually Jacqueline remarried to a man named Paul (rather ironically, Paul was an electrician), but even after moving in with him the strange and frightening phenomena continued to occur. Her radio would turn itself on and coast between stations, and her television would do the same thing without her intervention. Her stove, like the vacuum cleaner, burned out, and often when she would touch appliances, she would receive a jolting shock.

On one occasion, Jacqueline was accused by a visiting reporter of perpetrating an elaborate ruse, in which she had concocted the entire story of her alleged “powers” in order to gain attention and, perhaps, sympathy too. Jacqueline was so angered by the reporter’s assertion that a vacuum cleaner she was holding reportedly caught fire, frightening both Jacqueline and her accuser. But in truth, she hadn’t wished for sympathy at all, instead wishing only for release from whatever was causing so much madness in her otherwise normal life.

By this time, Jacqueline had begun to suffer from headaches, as well as intermittent fainting spells; at one point, she even contemplated suicide. At last, at the advice of her new husband, Jacqueline agreed to meet with a Professor Roy Gough, who provided data about broken electric rings from one of the cookers Jacqueline had accidentally destroyed with her touch. Gough contacted Paul, and reported that the contacts had been high-voltage welded. “They weren’t fused,” her husband said of the information the professor provided. “That’s when we began to suspect that Jackie was somehow the cause of all these electric disturbances. She was blowing the ring circuits without realizing it.”

With time, Paul developed what he believed may be a solution to the problem: he believed Jacqueline was a likely candidate for a natural, but unusually high build-up of static electricity within her body, possibly due to an alkali-acid imbalance within her body that helped her to adapt to artificially retaining static charges. He developed a number of methods for treating Jacqueline’s condition, ranging from the consumption of more fruits and vegetables, to having Jacqueline carry onions in each hand while walking around the house, which helped dissipate the excess electricity.

“She was discharging her surplus static into the onions,” Paul told the New Straits Times in an interview, noting that based on this he had managed to create a smaller, simple device which Jacqueline wore that achieved a similar effect.

As unusual as Jacqueline’s story may seem, she isn’t the only individual to have suffered from this strange, and literally shocking affliction. The disorder is sometimes known as as High Voltage Syndrome (or HVS), and a number of similar cases have been documented. At least one may date back as far as 1837, as Fortean researcher Mark Pilkington noted in The Guardian in 2004.

On a final strange note, it was reported that in 1985, with the birth of Jacqueline’s fourth child (a daughter), on one occasion the midwife had been startled by a shock she received from the infant. As unusual as Jaqueline’s own condition had been, it seemed that she may also have passed it along to her progeny, as well.

The odd circumstances which had led Jacqueline from having once believed she was “haunted” by her deceased husband, to having eventually felt her husband’s knowledge of electricity had helped save her life, presents a unique case, and one worthy of study. Some have expressed skepticism of the incident; one Wikipedia editor, for instance, had recently argued over whether an entry for Jacqueline Priestman should be kept at all, based on what he perceived as doubt over whether it can be proven she existed (despite numerous photographs and interviews appearing in publications like the aforementioned New Straits Times article from 1985).

In the annals of folklore surrounding claims of the unusual, which range from ghosts and hauntings, to alleged UFO contact, many have similarly discussed the presence of strange electrical phenomenon. This begs the question, might further study of cases like Jacqueline’s lead us to a better understanding of natural conditions which, as Jacqueline herself had once believed, might otherwise be interpreted as the onset of some inexplicable paranormal phenomena?