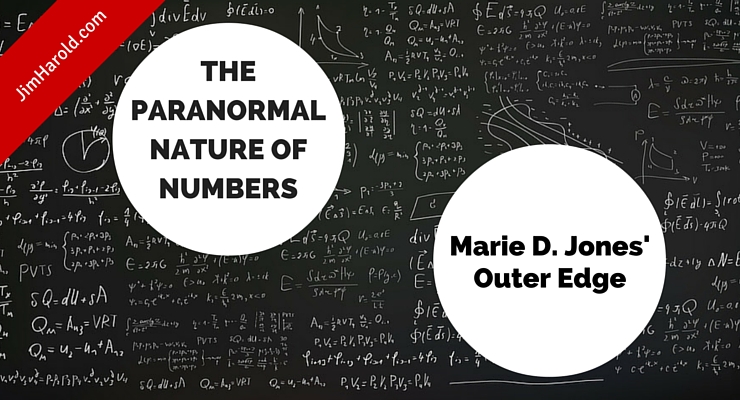 We usually think of the paranormal as the invisible world of ghosts, entities and otherworldly abilities like remote viewing, ESP and precognition. Paranormal is “beyond normal;” things we cannot yet explain within the confines of modern science. But nature, and reality, holds mysteries equally paranormal, and yet utterly scientific in their origin and explanation. One of those mysteries involves the absolutely wild and wacky world of…wait for it…numbers.

Most of us cannot stand math and hate balancing our checkbooks (although most of us do that online now!). Mention numbers and people cringe, instantly associating them with bad memories of junior high school math quizzes and big, fat F’s at the top of the test. Those strange creatures that do love math, and its associated studies of geometry, algebra, calculus and physics, know that numbers go far beyond their appearance. They harbor a magical power of their own, both creative and destructive. In fact, physicists will tell you that at the heart of reality itself, the language of the universe and the foundational basis for life goes back to…numbers. Math. Mathematical ratios.

Throughout nature, we find grouped number sequences and patterns that form the underlying structures to everything from flowers to seashells to the way tornadic winds develop. Two of the most enigmatic examples of this are the Golden Ratio, and the Fibonacci Spiral, both of which imply a higher order of measurement behind what many of us take for granted, including our own physical bodies.

So where do we find this wonderful ratio at work? How about the Great Pyramid of Giza, the structure of a five-pointed star or Pentagram, the outline of the Acropolis near Athens, Greece (a Golden Rectangle), and most famously, our own bodies, as portrayed by Leonardo da Vinci’s famous “Vitruvian Man.” Look at the image and you’ll see the Golden Ratio at work in the correspondences between the body and its parts, the greater whole to the lesser limbs. 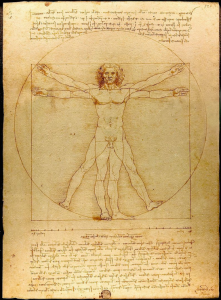 The Vitruvian Man comes from the ancient Roman architect, Vitruvius, whose “De Architectura” inspired da Vinci’s fascination with the Golden Ratio and his use of the ratio in his paintings The Last Supper and the Mona Lisa. In fact, in the Mona Lisa, da Vinci used the Golden Rectangle for her face, presenting the perfectly symmetrical ratio of the width of her forehead compared to the length of the top of her head to her chin. Her face is said to have been considered the perfect face of a woman, at least by standards of the past!

The Last Supper contains three vertical Golden Rectangles, and one decagon, a Golden Ratio shape, for the figure of Jesus. You would never know this upon viewing the painting, and that’s on purpose. It’s an aesthetic that is pleasing to the eye, but without the observer really knowing why.

The use of Golden sections and geometric ratios are often done for their aesthetic value alone, but sometimes it goes beyond the looks of things. Certain Celtic and Indian labyrinths and mandalas used Golden Ratios to create spiritual resonance with symmetry and measurement, affecting the observer perhaps on a subconscious level, where symbolism and pattern reign supreme, as well as a physiological one.

One of the most widely known and most fascinating Golden Ratios is the Fibonacci Sequence or Spiral, originally discovered by Leonardo of Pisa, born in 1170 C.E. Leonardo also went by the name Leonardo Fibonacci, or just simply, Fibonacci, which basically means “son of Bonaccio.” Fibonacci, as we will call him, was the man responsible for the spread of the Hindu-Arabic numeral system into Europe, but he was much more widely known for a sequence of numbers that run as such: 0, 1, 1, 2, 3, 5, 8, 13, 21, 34, 55, 89, 144 and so on…

Fibonacci wrote a book in the 13th century titled “Liber Abaci,” or the “Book of Calculations,” and in it, he presented his brilliant knowledge of Middle Eastern mathematical systems, and the above sequence of numbers. This particular sequence is a series of numbers designed so that each number after the first two numbers is the sum of the previous two numbers. The higher the numbers in the sequence, the closer the two consecutive numbers divided by each other approach the Golden Ratio of 1:1.618. 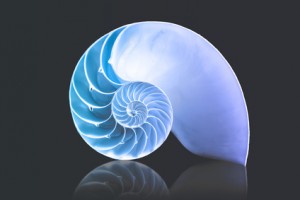 In nature, Fibonacci noted that this sequence is present in spiral structural patterns, as well as the way leaves grow on a stem in several species of flora, and the manner by which lightning branches out, the way rivers branch, even the proportions of bodies to wingspans of birds and flying insects. Even snowflakes had a distinct geometric pattern of formation, as well as our own DNA. These ratios and sequences were EVERYWHERE.

One of the best examples of the Fibonacci Spiral is the Chambered Nautilus, a marine cephalopod that actually grows at a rate matching the Fibonacci sequence! Some scientists have posited that this structure could just be a logical outcome of the natural principal of geometric designs and not necessarily some mystical, paranormal aspect of divine intelligence. Although we might argue that whatever created all of nature sure did an intricate job and seemed to enjoy sophisticated patterns and ratios!

And nowhere might this play out on such a massive scale as in the theory that our entire universe can be whittled down to just six numbers – well, mathematical ratios that if tweaked ever so slightly in one direction or another could have prevented biological life from ever evolving on Earth.

The most vocal proponent of the “just six numbers” theory is Sir Martin Rees, Britain’s Royal Society Research Professor at Cambridge University, and the Astronomer Royal. In his book “Just Six Numbers,” Rees proposes six sophisticated ratios that allow for the formation of chemicals and gases, planets and solar systems, and…us.

Rees and his colleagues all agree that if any of the above six ratio/numbers were ever-so-slightly plus or minus in variation, our Universe would be a totally different thing, if it could exist at all, suggesting an incredible sophistication to the design of all of reality. Though many choose to impose a religious connotation to the idea of Intelligent Design, many astrophysicists and astronomers suggest there is indeed an intelligence behind the incredibly intricate ratios and laws of the universe…although that intelligence does by no means imply an anthropomorphic one.

There is another number, called “N,” which dictates just how large our Universe is allowed to get. Beyond that value, or below it, the gravitational force might exceed the electric force, and the Universe would cease to exist. To think that our own existence is based upon such fine-tuned numbers is amazing, but also a bit terrifying, when we think of how one little slip of that tuning could lead to unimaginable catastrophe.

In his book, “The Goldilocks Enigma: Why the Universe is Just Right for Life,” physicist Paul Davies stated that our ancient ancestors were very much aware that beneath the surface complexity of the cosmos was a deeper, hidden code, and that code was written in the language of mathematics. Science, says Davies, “has uncovered the existence of this concealed mathematical domain.” Thus, the most fundamental basis for existence comes down to numbers, and as many scientists have suggested, any alien civilization that may want to communicate with us would do so in the language of mathematics, not words, because mathematics is a true language that goes beyond borders, boundaries, cultures and traditions. Mathematical laws, ratios and rules apply anywhere, anytime, to anyone. Aliens might indeed have their own specific languages on their home planet, as we do, for communicating with each other, but when it comes to speaking with those of another planet or civilization, they would most likely choose the universally understood language of measurement and ratio.

But most of us really don’t want to think about the structure of the cosmos. We are more interested in how numbers play a paranormal role in our day-to-day lives, and they do so via patterns. Whether we are talking about the structure of a flower on a stalk, or our own bodies, or the repetition of number sequences our brain might seek out in the forms of time prompts and number “pokes” from the spirit world, as some call them, there is a part of our subconscious that responds to the true symbolic nature of numbers and number patterns. Perhaps this is why so many of us are drawn to mandalas, labyrinths, and even intricate crop circles, whether manmade or otherwise. We are responding to the symmetry and the aesthetic value of the structure both consciously, and subconsciously.

The brilliant physicist and father of quantum theory, Werner Heisenberg, believed that the most fundamental aspect of nature was particle symmetry. F. David Peat, a physicist and author of a number of books on science and quantum physics, wrote in “Synchronicity: The Bridge Between Mind and Matter,” that “symmetries could be thought of as the archetypes of all matter and the ground of material existence.” But he went one step father, suggesting that it might be possible that archetypal symmetries might manifest themselves in the internal structures of the mind, as well as having the “immanent and formative role that is responsible for the exterior forms of nature.” If this sounds a lot like the ancient Hermetic “as above so below,” or as within, so without, well, that’s because truth is truth and stands the test of time. Our ancestors knew that there was a profound link, or perhaps we might say, symmetry, between what went on in the cosmos and what happened here on the Earthly plane, and our modern scientists seem to be catching up to that understanding.

Symmetries, patterns, ratios that are so magical they are considered “golden,” all of which form the perfectly tuned music of the spheres, the structure of the cosmos, and everything within them. So, does this suggest that some God was responsible, or perhaps a giant cosmic computer spitting out its and bits of information to create a sophisticated blueprint of creation? Is this a matter of “confirmation bias” in the human brain and our desire to seek patterns to fit meanings, or vice versa…or is there a hidden infrastructure of reality that is based entirely on the ratio of one measurement to another?

Either way, it all goes back to numbers.