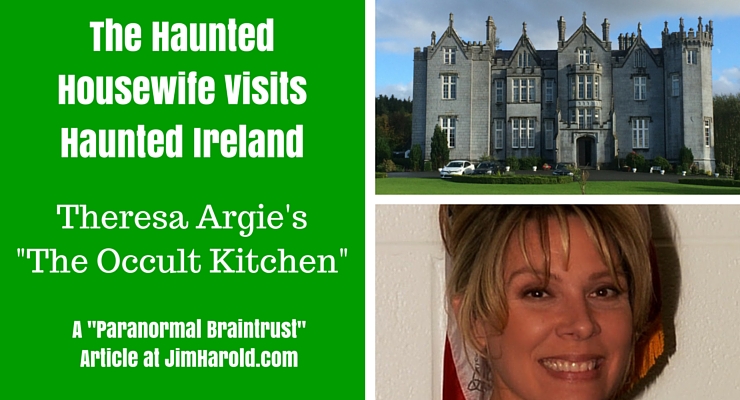 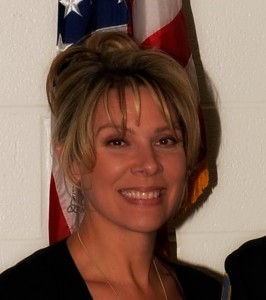 Being the first generation daughter of an Irish immigrant, Ireland has been a place I’ve dreamed about often. It was at the top of my paranormal bucket list. I never had the opportunity to visit my father’s homeland until recently when my wonderful husband surprised me with a trip. It was a birthday/anniversary/Christmas present…for the next five years or so.

My trip was spectacular. I spent time in majestic castles and ancient ruins, as well as the 200 year old stone cottage where my father and his twelve brothers and sisters grew up. Historically and personally, I hit the jackpot.

Ireland is a small country, approximately equivalent to the size of Ohio. Still, traversing the Irish countryside in just over a week was to be a formidable task. I had to adjust to driving on the wrong side of the road in a car with a steering wheel on the right. The roads were extremely narrow, speed limits in metrics, and the signs all written in Gaelic. But the scenery was captivating.

I pretty much white knuckled my way from Dublin to Galway, suffering a slight anxiety attack (or two) as I made my way north to County Mayo. But the adventures I had along the way were well worth every new gray hair that appeared on my head. Ireland and its breathtaking beauty blew me away. I was utterly bewitched.

The first stop on my itinerary was County Offaly in the midlands region – the heart of Ireland. I booked two nights at Kinnitty Castle, a lesser known but incredibly interesting 13th century gothic revival castle set squarely in the foothills of the Slieve Bloom mountains. Kinnitty is not as well known as neighboring Leap or Charleville castles, but it had its own intriguing history and ghostly reputation.

The age of the castle is almost inconceivable, a concept nearly lost to the American psyche. In the states, we rush to tear down anything over thirty years old to make room for some modern monstrosity. Progress and efficiency are the enemy of historic preservation.

Kinnitty Castle is absent of many modern conveniences, including wifi and television service. The rooms are drafty and damp, and the sound of creaky wooden floors echo loudly off the high ceilings. Oversized canopy beds resemble those of the nobles. Mahogany vanities and oversized wardrobes are fit for a queen. Dusty but colorful tapestries hang on the cold stone walls. It is perfect. 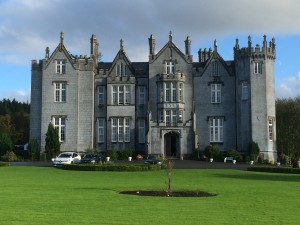 Upon arrival I immediately ingratiated myself to the staff, including a charming fellow named Conner who was more than happy to share the castles haunted history with me. There were plenty of ghost stories associated with the castle. I learned of the more popular resident spirits of Kinnitty, including those of a young woman named Geraldine and a monk named Hugh.

Geraldine’s spirit is known to favor the top floor of the castle and even has a room named for her. Hers is one of the more popular “haunted” rooms. She’s spotted regularly, emerging from shadowy corners, giving guests quite a fright! Some report seeing Geraldine as a red mist, hovering over their beds or floating down the quite castle corridors.

Another active entity is Hugh “the monk of Kinnitty”. He had a reputation for being a jolly soul, much loved by all who knew him. But he had a dark side – a secret turmoil that brewed inside him like a poison. Eventually, the forced smiles and laughter couldn’t mask his internal pain. Hugh did the unthinkable – he took his own life.

Hugh remains at Kinnitty Castle, a place where he lived both the happiest and saddest days of his life. He frequents the Abbey, an annex of the original building that houses several guest rooms, including my own.

Other ghosts are known to haunt the castle, including that of a nameless male. He’s described as a tall, dark haired man with broad shoulders and a fearsome stance. He’s of a more aggressive breed and recently pushed a guest down a flight of stairs. I was in no hurry to run into that guy.

One evening as I was settling into bed, I decided to try my luck with a bit of spirit communication. I was anxious to do as much paranormal investigating as I possibly could. I couldn’t pass up this unique opportunity. I pulled out my crystal pendulum and portable spirit board mat, along with my trusty audio recorder.

Pendulum in hand, I asked if there were any spirits with me. From complete stillness, the chain began a slight back-and-forth pattern. I repeated the question. Almost immediately I felt the pull of the crystal as it swung toward “yes.”

The pendulum moved at a maddening pace and quickly spelled out H-U-G-H. I was amazed. I thought maybe my subconscious was responsible for the response by triggering micro movements in my hand, so I asked again. I got the same answer.

I followed up with, “Are you the monk?” The pendulum once again indicated “yes”.

“Are you alone?” I asked next.

At this point the pendulum motion began to change. Instead of the steady front-and-back swaying, it literarily stopped dead, switched directions, and swung over to “NO.” I almost dropped the chain. I was not moving it. A force outside of me seemed to control the movements, which were not at all subtle but most deliberate.

I felt the energy in the room change, as if the air had been sucked out and replaced with something thicker, less breathable. I was surrounded by an ominous darkness and a cold chill encompassed my body like a heavy wet blanket. I was not alone. 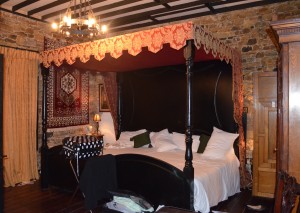 Quickly, I grabbed my audio recorder, hoping I’d captured some sort of EVP. At first I heard nothing but my own voice, asking questions and commenting on what was going on… until the question:

I was so startled I dropped my recorder. There was no mistake, I captured a blood curdling EVP in response to my question. I was most definitely not alone, and I don’t think Hugh was my only ghostly guest. There was a darker, more malevolent spirit in that room with me. My body shivered at the thought.

I felt another sudden rush of icy cold air before the temperature returned to normal. The veil of darkness lifted to a more natural level and I could once again breath easily. The ghosts were gone. Whomever, or whatever I’d made contact with was gone. The excitement I felt was paired with a sense of relief.
This was only one of my ghostly encounters at Kinnitty Castle and the first of many in Ireland. My next stops were the legendary Leap and Charleville Castle, both thought to be among the most haunted castles in the world! My adventure had just begun.

Ghosts are a given in a country like this. They lurk around every corner and hide in the smallest of shadows. They linger the the crumbling ruins and vine-covered stone houses that decorate a most haunted land.