The Most Haunted Theater On Broadway: The Reprise of Mr Belasco – Ryan Sprague 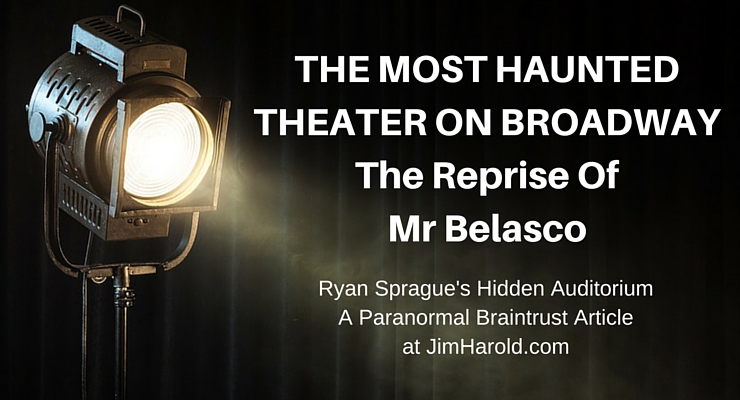 “She hasn’t worked here since.”

These were the words of an usher concerning a fellow co-worker of hers. It was my first night working in this particular theater, and I’d heard many stories concerning strange noises, smells, sights, and feelings. But nothing quite like this. The usher would go on to tell me that every night, this usher would be the “closer”. She’d make sure the entire theater was empty of patrons and employees, she’d shut off all the lights, and she’d lock up all the doors. Upon leaving, she would always say goodnight to the original owner of the theater, Mr. David Belasco. Though one night would prove unusual as she completely forgot to do so. She locked the last remaining door and turned to leave. Suddenly, every single door of the front lobby forcefully swung open. The usher stared in disbelief as she knew full-well she’d locked them all. This was long before automatic doors, and not a single gust of wind was felt on that calm night. There simply was no apparent reasoning for the doors to have done what they did. Completely in shock, the usher reported what had happened to the police, and asked for a theater transfer the following morning, never to return.

Through my various jobs working on Broadway, I’d heard many stories of this particular theater being a haven for paranormal activity. The Belasco Theatre; a thousand-seat venue tucked snuggly on 44th Street in New York City, was originally built in 1906, under the direction of its owner, David Belasco. Belasco was a play and musical producer known for choosing unknown actors and elevating them to stardom. He also preferred playwrights whose success depended upon his collaboration. He soon gained a reputation in the theater community for productions that included lavish sets, special effects, and experimental lighting. But perhaps the most interesting thing about Mr. Belasco was that he even took up residence in the attic of the theater, converting it into a ten-room duplex penthouse where he could make work his home. Rumors spread that he’d even had floorboards carved out so that he could see into the theater when rehearsals and performances were going on. His reputation came to an unfortunate halt when he took his final bow of mortality on May 14th, 1931. But it seemed that both his work and presence in the building were far from facing its final curtain.

Immediately following his death, actors and crew members in the theater claimed to see a full-body apparition of Belasco. He would dawn his frequent outfit which included a clerical collar and cassock. These clothes caused many to nickname him the “Bishop of Broadway”. Actors onstage reported that they could often see a figure dressed as such, watching rehearsals from the balcony. Some actors even went so far as to claim that he would shake the hands of the males and would pinch the rear-ends of female performers. It was rumored, that in life, Belasco was very fond of beautiful actresses and may have even had peep-holes in his apartment that led directly into the female dressing rooms. This is, of course, only speculative, as the apartment has suffered much damage throughout time and a lot of the original floors have been renovated. But while this prolific (possibly “Peeping-Tom”) theater owner congratulated performers from the grave, he may have also shown his disapproval. After particularly bad performances, performers would often hear drawn-out moans echoing from the theater wings, and they’d even find their dressing rooms in disarray upon entering them after the show. It was also well known that Mr. Belasco loved smoking cigars, and even today, the staunch smell of cigar smoke sporadically wafts through the balcony seats and beyond.

The story of the usher and the swinging doors was very dramatic in fashion. And as I would soon learn, many of Mr. Belasco’s ghostly activity often came in the form of small pranks. This led me to a rather entertaining story from author, Adam Carpenter, who has written a detective series set in the Broadway community. Aside from his writing, Carpenter is also the head-ticket taker at the Belasco Theater, He would relate the following incident to me:

“The date was July 15th, 2015, and the front of the house staff had gathered to celebrate the 162nd birthday of Mr. Belasco. Having worked there on and off since 1991, I had seen no proof of ghost-like activity. Until that fateful day. Prior to the opening of the doors for ‘Hedwig and the Angry Inch’, I changed into my black suit, and I happened to be wearing a black shirt and tie as well. Deciding to play a trick on the staff, I waited until everyone was gathered in the house manager’s office—what would have been Belasco’s office back in the day. Before joining them, I took a white napkin and made it into a clerical collar, and attached it to my shirt. I then proceeded up the stairs, from the lobby to the office, where I then flicked the lights, and announced in a spooky voice that “I am the ghost of David Belasco…” I freaked out some staff, but most thought it was funny. Except Belasco. That night, when it came time to activate my scanners to scan tickets, they didn’t work. I had to tear tickets the old fashioned way, which is not the way to get 1,000 people through the door in 30 minutes. When I went to return the scanners to their chargers, I noticed a curious thing. The plug was not in the socket, a phenomenon which had never happened in all my years of working. Belasco, after all these years of ignoring me, had finally announced his presence. And he wasn’t happy.” 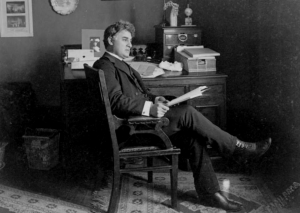 David Belasco, “The Bishop of Broadway”

Adam’s story led to several others who may have had a brush with Mr. Belasco’s playful nature. I would speak to Andrew Sanford, the manager at the interior bar at the Belasco theater. He recounted a rather creepy experience he had one night in his office. Here it is in his own words:

“One night I was alone, in the office, counting the money for the night. And the office is room temperature, tops. Suddenly, and I do mean suddenly, a wave of cold air came through the office. It lasted about fifteen seconds and was gone. But it wasn’t just a wave. The room changed and then went right back to room temp. What was weird, is that to my recollection, there are no vents in that office and my door was completely shut tight. There was no where for this cold snap to come from. Needless to say, I put my money in the safe and waited out the rest of the show in the coatroom. Didn’t go back in the office till the next day.”

This experience was intriguing because of its correlation to many who’ve experienced some sort of paranormal activity. In the realm of ghost investigations, this phenomenon is known as a “cold spot”, in which a supposed area of localized coldness or a sudden decrease in ambient temperature that can not readily be explained by other natural or mechanical causes. But as I would soon learn, this wasn’t the only story coming from the bar staff at the Belasco Theater. Vinnie Costa, a bartender, recalled an unusual incident that occurred the week of Mr. Belasco’s birthday:

“That night, there was an odd feeling permeating the theater. Something electric was certainly in the air. I was working the coat room (bartenders often doubled as coatroom attendants), so it was my job to stay until the end and return checked coats. During the actual performance, we’re allowed to leave during the actual performance, so I decided to grab a bite to eat. I unlocked the door, closed it, checked to make sure it remained unlocked, and left for about fifteen minutes. When I got back, the manager had left and the coat room door was locked. Assuming he’d accidentally locked it, forgetting I was coming back, I texted him and he said he never touched the door that night. I asked another bartender, and they too confirmed they hadn’t touched the door. This bartender proceeded to tell me that he thought I’d been locking his cabinets after he unlocked them that night. Not one, not twice, but three times! I later found out that even the House Manager of the theater suffered the same issue, having gotten locked out of her office twice that night! Now, every time I enter the Belasco Theater through the stage door, I greet the spirit of Mr. Belasco, respectively, and with reverence. I’ve yet to be locked out of anything there again.”

Every evening after a Broadway theater is closed and all the lights are shut off, a single light is left on the bare stage to prevent hazardous falls or injuries the next day. But this instrument, aptly named a “ghost light”, is also a tradition that is supposed to ward off any negative spirits haunting the theater. But in the case of Mr. Belasco, it would seem that the “ghost light” in his theater illuminates his presence more than warding it off. So next time you find yourself sipping a cocktail at the Belasco Theater, or sitting in the balcony to watch a play, remember to either say hello or goodbye to Mr. Belasco. And behave yourself. Who knows who may be watching you from the apartment above?

Ryan Sprague is a professional playwright & screenwriter in New York City. He is also an investigative journalist, focusing on the topic of UFOs. He is the author of the upcoming book, “Somewhere in the Skies: A Human Approach to an Alien Phenomenon”, published by Richard Dolan Press. He co-hosts both the Into the Fray and UFOmodPod podcasts, both available on iTunes & Stitcher. His other work can be found at: www.somewhereintheskies.com