How To Kill A Ghost – The Haunted Housewife’s “Occult Kitchen” 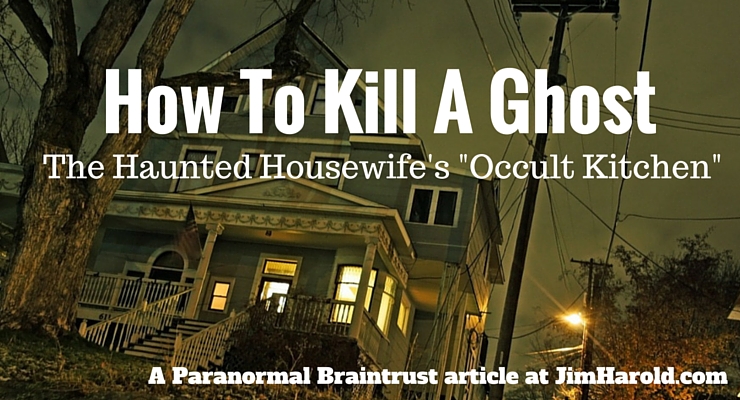 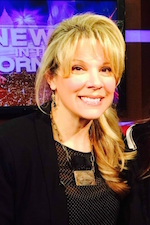 One of the most challenging obstacles ghost hunters face is navigating through the muck and mire of the paranormal world. They must weed through each report and rule out natural explanations, misidentifications, psychological front loading, embellishments, and intentional hoaxes.

The reports are many but the true hauntings are few. Unusual doesn’t necessarily mean paranormal. The power of suggestion and expectation can create the illusion of a paranormal occurrence where nothing abnormal exists. In a sense, we can create ghosts.

The reverse is just as misleading and far more devastating to those who believe. Destroy the idea and you kill the ghost. Not in the Sam and Dean Winchester Supernatural salt-and-burn-the-bones kind of way, but destroy it nonetheless. In fact I have killed many ghosts.

To kill a ghost you must first understand how they are created. You must be able to decipher between what is natural, supernatural, and psychological.

Our minds can take an idea and give it life. We conjure this ghost, give it power by our belief, wishing it to be true – like a tulpa or though form being. Although unintentional in many cases, sometimes this process is deliberate. Certain reality television shows who need a ghost to be real will often do this. They take an odd occurrence, develop it into a mystery which in turn grows into an enormous legend, twisting the truth to fit a colorful story, and add a dash of skewed history for authenticity. Viola! Now they’ve created a ghost!

One thing that helps this type of ghost “live” is the power behind the belief system. A legend grows with every telling of the tale, with each reported encounter, and every attempt at communication. This, in theory, is why places like The Ohio State Reformatory or Waverly Hills Sanatorium are said to be so haunted – the constant “calling” of the spirits by visitors and the expectation of finding a ghost.

Not all ghost hunters do much original research. Instead they hear the legends and expand on what others have done before them. If the accepted story is that the ghost of a little boy named Timmy haunts the halls of a famous abandoned TB hospital, then most investigators use that information as a starting point. They’ve heard the stories, the EVPs, seen the fuzzy dust filled photographs, and just go with it. They continue along this train of thought and expect to find Timmy.

How do they know for sure it is Timmy? How do they know it’s even a child’s spirit? The truth is, they don’t know with whom or with what they are communicating when conducting a paranormal investigation.

What if the original story was wrong or made up? What if Timmy never existed? What are people seeing and communicating with? The facts don’t always deter the phantoms.

If history proves there never was a Timmy, then what is happening? Is the ghost answering to a name because it’s desperate to communicate? Has it been called or beckoned from somewhere else? It may be a ghost, but it may not be Timmy.

Killing a ghost is like peeling an onion; every time you replace a myth with a fact, another layer is removed. The sharp knife of accurate historical research cuts through the paper-thin skin holding the story together. Fact checking property deeds, death records, newspaper articles, eyewitness interviews – these are the weapons I use in my quest to kill ghosts. With every discovery of an inaccuracy, embellishment, or unreliable source, I spill the blood of the imaginary apparition.

I found that killing a ghost can be a delicate matter. People love their ghosts. They cling to their stories like a lifeline to the afterlife. The legend of Lily keeps ghost hunters flocking to the Trans-Allegheny Lunatic Asylum in droves. If someone was to prove that Lily never existed, that there is no tortured child spirit roaming the halls of the defunct mental hospital, then paranormal enthusiasts might choose to spend their evenings and their money elsewhere.

When researching my first book (America’s Most Haunted: The Secrets of Famous Paranormal Places) I unexpectedly discovered the dangers of phantasmicide (I just made that up.) Paranormal venues that rely on their reputed ghosts to bring in visitors and revenue get very testy when you debunk their resident spirits. The reputation and personalization of the hauntings makes them very real. Giving them a name and a backstory gives them life. Taking that element away destroys the legend and destroys the ghost, and that’s bad for business.

Residential cases are similar. Strange happenings plague the family. The kids are talking to invisible entities, strange rapping noise are echoing through the hallways at night, eerie cold spots appear out of nowhere, or there’s an unshakable sense of being watched. They believe they have a ghost and they want someone to come investigate, expecting the investigators to produce a full blown apparition for them.

In these cases, it’s like fighting an uphill battle. The family truly believes their house is haunted and they want someone else to believe that as well. They don’t want to hear a rational explanation for the strange noises or smells they’re experiencing. They are not interested in a contradictory opinion. They want more than anything for someone to believe them. If told they have an unsafe level of EMF leaking from their breaker box, or a family of raccoons living in their attic, or they need to up their medication, they get angry.

The very last thing they want to hear is that there is no ghost. Most of the time, people don’t want reason and logic – they want validation or attention. They are offended at your findings. They are more upset when you disprove a haunting than when you tell them there’s a demon in the closet.
When you kill a ghost, you kill part of the family. You kill a piece of their reality, their sense of judgement, their ability to know fact from fiction. You are suggesting that they are wrong, disillusioned, or psychologically damaged somehow – or worse that they are just average, normal, boring. Their home is not haunted and they don’t have a ghost. They are not special. For many that is a bitter pill to swallow.

Think about the term “ghost hunter” and what that means. To hunt something is to capture and often kill it. Hunting a ghost, whether it be real or imagined, can lead to its literal and figurative death. Again.

Sometimes a ghost is real, sometimes a ghost is imagined, and sometimes we can make a ghost real with the power of our imagination. Keep that in mind next time you embark on a paranormal investigation or watch your favorite ghost themed reality show. The perception is the reality, both on the physical and the metaphysical plain.

Beware of ghosts, but also be aware of your power to create and destroy them.