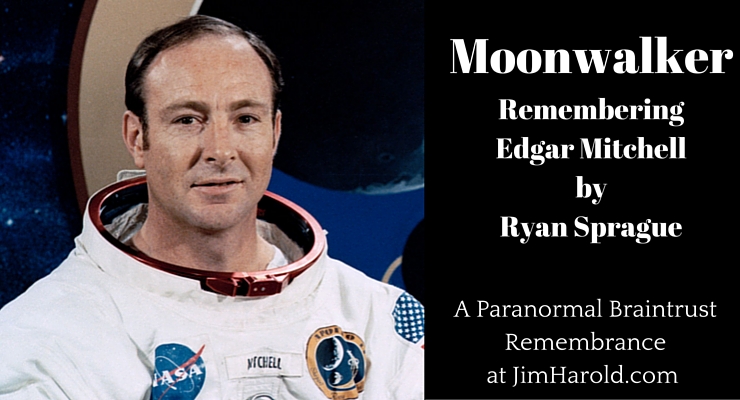 He’d taken his first ride in a plane when he was four years old in his hometown of Pecos Valley, New Mexico. It was a happy accident by a barnstormer pilot who’d ran out of fuel. That emergency landing on the farm of Edgar Mitchell’s father led he and the four year old to drive the pilot to get fuel. In appreciation, the pilot gave them a ride in his small plane. But the impact on a young Mitchell was anything but small, and inspired him to eventually become a pilot himself at the age of sixteen.

In 1952, he’d graduated from Carnegie Tech. From there, he enlisted in the Navy, and soon found himself in the seat of a fighter plane during the Korean War. All the meanwhile, he’d been studying Aeronautics in Navy Post-Graduate School, eventually receiving his Doctorate in Aeronautics and Astronautics from MIT. In 1966, Mitchell made the biggest decision of his life, and at the age of 36, began working at NASA, hoping one day to leave the Earth behind for higher altitudes.

His work at NASA was rigorous and time consuming, working tirelessly on the ground for the Apollo 9, Apollo 10, and Apollo 13 missions. His dedication clearly shined through, and he eventually worked his way up to a possible flight in space. After several years of intensive training, he was officially accepted into the Apollo 14 mission as a Lunar Module Pilot, heading for the moon. Along with his commander, Alan Shepard, and Command Module pilot, Stuart Ross, Mitchell prepared for take-off on January 31st, 1971.

Despite a few setbacks, Shepard and Mitchell stepped foot on the moon on February 5th. Mitchell helped collect 94 pounds of lunar rock and soil samples that were distributed across 187 scientific teams in the United States and 14 other countries for analysis. The mission also broke records, having succeeded in being the lengthiest distance traversed on the moon, the largest lunar payload returned from the moon, and also the longest stay on the moon, which lasted about 34 hours.

While these accomplishments were certainly reasons to be proud, they paled in comparison to the profound nature that the entire experience personally had on Mitchell. The nature of walking on the moon would obviously change any individual. But seeing the earth rise just over the horizon completely changed Mitchell’s outlook on humanity itself. He was once quoted as saying: “You develop an instant global consciousness, a people orientation, an intense dissatisfaction with the state of the world, and a compulsion to do something about it. From out there on the moon, international politics look so petty. You want to grab a politician by the scruff of the neck and drag him a quarter of a million miles out and say, ‘Look at that, you son of a bitch.’”

These new ways of thinking led him to search deeper within, testing the limits of how space exploration can truly alter the human condition. He would further study these implications through the Institute of Noetic Sciences, which he founded in 1973. The institute currently conducts research on such topics as meditation, consciousness, spirituality, psychic abilities, and even psychokinesis. The institute currently offers thousands of articles pertaining to the possible benefits meditation may have on both physical and mental health.

His search for deeper answers to what many consider fringe topics didn’t end there. Mitchell soon became an advocate for demanding world governments to disclose what they knew about UFOs and the existence of extraterrestrial intelligences visiting our planet. In at interview on Kerang Radio in 2008, Mitchell stated: … “it is a real phenomenon and there are a few of us who know. It’s been covered up by all our governments for the last 60 years or so. But slowly it’s leaked out and some of us are privileged to have been briefed on some of it… I’ve also been in military circles and intelligence circles that know below the surface of what has been public knowledge that, yes, we have been visited.”

His knowledge on the topic, and passion to search for answers on what really lay beyond our planet only grew, and he soon became a board member for the Foundation of Research into Extraterrestrial Encounters (F.R.E.E), which facilitates scientific investigations into UFO reports and possible contact with extraterrestrial intelligences. Mitchell’s recent death prompted the other members of the organization to directly name the foundation after him. Their work continues today, comprised of members in many different scientific, psychological, and legal fields.

The life of Edgar Mitchell was clearly what many would consider well-lived. His passion for exploration inspired so many to literally reach for the stars, the diversity of those training to become astronauts growing every day. His footprint on the moon spoke volumes for those back on Earth, and with his passing, he leaves a legacy far beyond any mission he could have completed in life. He stared the unknown in the face, and used those revelations to expand the knowledge of each and every person back on Earth in the most ambitious ways he believed he could.

Commenting on his Apollo 14 mission, Mitchell once said, “To me, that spaceflight was the culmination of my being, and what can I learn from this? What is it we are learning? That’s important, because I think what we’re trying to do is discover ourselves and our place in the cosmos, and we don’t know. We’re still looking for that.” As we continue to explore the vastness of space and the possibility of travelling to other planets, we remember Dr. Edgar Mitchell for the true hero he was. Perhaps the answers he sought lay somewhere in the skies of possibility. And as we stare outward, we can take comfort in knowing, that with his accomplishments and contributions to humanity, something will undoubtedly begin to stare back.

Ryan Sprague is a professional playwright & screenwriter in New York City. He is also an investigative journalist, focusing on the topic of UFOs. He is the author of the upcoming book, “Somewhere in the Skies: A Human Approach to an Alien Phenomenon”, published by Richard Dolan Press. He co-hosts the podcasts, Into the Fray and UFOmodPod, both available on iTunes. His other work can be found at: somewhereintheskies.com