Supernatural Files: The True Story of the Bridgeport Poltergeist Haunting 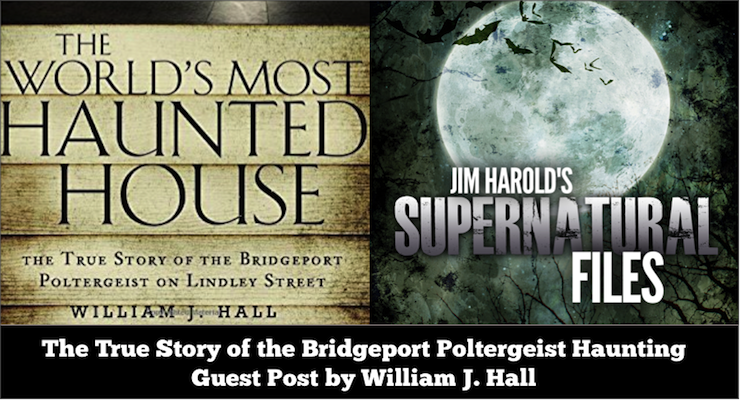 Jim’s Note: I thought Halloween would be a great time to debut a new feature I’m experimenting with here at the site, “Jim Harold’s Supernatural Files.”  The concept will consist of guest posts from various paranormal experts and authors.

First up, a past Paranormal Podcast guest tells us about a real life poltergeist. Enjoy!

The True Story of the Bridgeport Poltergeist Haunting

Laura Goodin was distraught. She was exhausted and concerned, fearing she was nearing the end of her rope. “Why us? Why us?” she repeated in her characteristic loud and less than pleasant, voice. It had been her question for many days now but something about it was different that time. Her tone seemed more reflective than before. She lowered her head into her hands and sobbed.

Laura was a plain looking, overbearing, heavy set women with 1970’s horned rim glasses and a stodgy wardrobe. She was socially inept, though filled with love for her family and eager to provide well for them. She was a loyal and supportive wife and devout in her faith. What little personal strength she had exhibited early in their ordeal clearly had begun to wane.

She lifted her head from her hands and continued, “Everything of value in our home is gone.”

This thorough suffering became immediately obvious as I listened to hour upon hour of private, intimate interviews with the family that had been undertaken and recorded as part of a serious scientific investigation. The Goodin’s story is a perplexing one. All they sought was solitude, away from the reporters and the hordes of people who insisted on hanging on in the hope they might witness some inexplicable event, which they could take away with them and exploit for personal advantage in its retelling. The Goodin’s made no money from the haunting and they shunned fame and self-promotion. They had nothing to prove to the world. Day after day, month after month, they quietly plodded along, side by side with the unexplainable terrors life kept feeding them. This is their story—their real heart-touching, life-changing story.

The year was 1974. The world had experienced The Exorcist less than a year before the horror that had been the Goodin’s reality, at last went public. There were the husband and father, Jerry, the wife and mother, Laura, and their ten year old adopted daughter, Marcie. They lived in a tiny bungalow on Lindley Street in Bridgeport, Connecticut. Jerry supported his family working as a low wage maintenance man at Harvey Hubbell, Inc. in Bridgeport. Laura was a stay at home housewife.

Due to her olive skin color as a full blooded five nations Indian, Marcie was picked on relentlessly at school. The bullying peaked when she was beaten up by another child and, as a result, found herself in a body brace. This incident only further fueled her mother’s destructive, if well meaning, overprotective instincts. The little girl’s frustration and loneliness boiled within her as she struggled to quietly hold it all inside. The parallel with events in the movie, Carrie, is uncanny.

According to experts, those kinds of frustrations and enforced inhibitions are the essential elements for inviting a poltergeist into one’s midst. The phenomenon is reflected in objects being moved and damaged, and people being roughly handled by an unseen force. One theory suggests that a child or teen who, without any physical action, unconsciously disrupts a setting, such as a home, by unleashing energy born from his or her pent up, boiling anger. Other paranormal experts suggest that these entities come to occupy areas through a parallel world. Some suggest that the mere circumstance of such an intense emotional phenomenon produces or invites an evil spirit to inhabit the home. Still others say it is a mixture of both spirit and psychic energy. The discrepancy among these theories continues to be the subject of much debate.

One aspect that distinguished this phenomenon from other similar situations was that it morphed into a very public matter. During November of 1974, the bizarre antics of the little house leaked to the public and attracted crowds that swelled to over 2,000 onlookers. Lindley Street was barricaded and traffic was backed up for a mile or more in all directions. A catch phrase developed and spread among the spectators up and down that street, and very soon across the continent: The house on Lindley Street is haunted!

Newspapers, radio, and television stations throughout the U.S. and as far away as Australia and Israel told of the strange things happening there: police officers reported seeing a 300- pound refrigerator float up off the floor and rotate, objects flying off walls, an amorphous, misty figure appearing to a house full of people, a talking cat, and even little Marcie being forced through the air until she hit the wall behind her.

Unlike many alleged ghostly events that had occurred in isolated, rural houses with only the report of their residents, these incidents had more than seventy-seven credible witnesses, among them a police lieutenant, a police captain, two fire chiefs, police officers, firefighters, two priests, neighbors, extended family, a seminary student, reporters, and others. In addition, approximately four hundred onlookers reported seeing the phenomena from outside the home. Well-known paranormal investigator Ed Warren said at the time that it was the most well-documented haunting in 100 years.

A major question remained, then: Why didn’t this case move the reality of the paranormal into a position of legitimate study in mainstream science?

After three days, the Bridgeport Police Superintendent Joseph Walsh announced that the incidents were a hoax created by the resident Goodin family’s ten year-old daughter Marcia and the case was closed. Police badly needed an acceptable explanation to placate and disperse the crowd camped near the house. Its mere presence was disruptive well beyond that block. It continued to block streets for miles around, causing mischief and property damage while holding valuable law enforcement resources hostage.

But behind the scenes, the inquiry into the events at Lindley Street was far from over. Police continued to offer the family protection from the phenomena even after the case was deemed closed by the police. The police captain also required officers, who had been on the scene, to assist in a scientific investigation conducted by two agencies: the Psychical Research Foundation, which got its start at Duke University in 1961, and the Spiritual Frontiers Fellowship. It seems obvious that the authorities clearly didn’t believe their own ‘hoax’ explanation. Police and firefighters who witnessed these bizarre events stood by what they had reported at the time.

The study for which they were interviewed concluded that the events were the doings of a poltergeist – literally, meaning “noisy ghost.” Poltergeist activity typically consists of strange noises, footsteps, moving objects, and the destruction of property with no visible physical cause, most often occurring in the environs of a prepubescent child. Ed Warren and a priest on the scene also attributed this particular series of events to a demonic presence in addition to the typical poltergeist manifestations.

So there I sat—a skeptic at heart looking at folder after folder of undeniable proof. In addition to the multitude of recorded and transcribed interviews from 1974 and 1975, there were official data sheets describing each event as it had been witnessed. Each incident was charted, describing what happened and where everyone was at the time. It is very unusual to have such precise and thorough documentation in which multiple witnesses from varying physical perspectives had their testimony charted individually. It allowed for mutual corroboration of the minute details, which substantiated there was no misinterpretation of the facts. The witnesses approached the phenomena logically, often not considering the paranormal as the source until eliminating other possible causes.

In my mind, the investigation did not dare end there. I began retracing the steps of those involved. I contacted several of the witnesses with whom I had interviews from 1974 and 1975. I also discovered numerous new witnesses. There were children of the witnesses from all those years before and electrical engineers, employees who worked in the records department of the Bridgeport Police, friends of the family, Jerry’s co-workers, and, whenever possible, surviving family members.

It is a heartbreaking story about the unwelcome forces that came to dominate every aspect of this poor family’s life – a family whose members only wanted the freedom to establish and maintain a quiet, fulfilling, happy life. They had not sought either fame or notoriety. They accepted no compensation for their story. They shunned the public view and abhorred having been hurled into the court of public opinion.

The opinions, assertions and theories of the writers featured in this section are theirs solely and not necessarily those of Jim Harold or Jim Harold Media LLC.  Neither Jim nor Jim’s company are liable for their content.