The Exeter UFO Incident: Is This “Cold Case, Closed” Worthy of Being Reopened? – Micah Hanks Writes 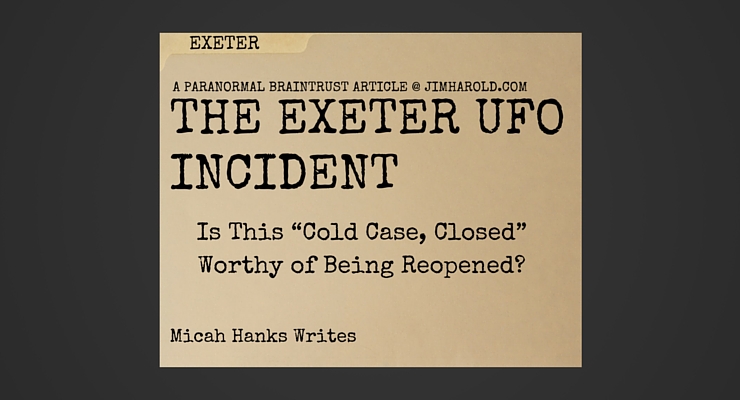 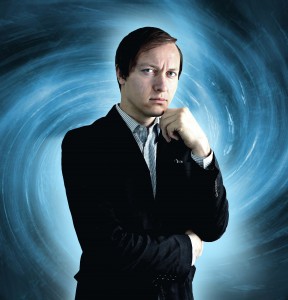 Strange things were happening on the early morning of September 3, 1965. At approximately 2 AM, just a few miles outside of Exeter, New Hampshire, an 18-year-old hitchhiker found himself face-down in a ditch alongside Highway 150. As he lifted his head, the youth could see a large object passing above him, fitted with red lights, and gliding away toward a farmhouse nearby.

The youth was Norman Muscarello, who had been on his way back from Amesbury, Massachusetts, where his girlfriend’s parents lived. He would often visit her, getting rides from friends or, on occasion, hitchhiking home as he had been doing on this particular evening. Tonight he had been walking along hoping for a late-night commuter who might give him a lift, when he first noticed a series of flashing red lights in the forest nearby. As Muscarello walked, he counted five distinct sources of illumination, which lit up the surrounding trees, as well as the Dining family’s farmhouse just off the road, whose owners were gone at the time.

Writer and UFO investigator John G. Fuller would document what occurred next in his famous book on what became known popularly as the “Incident at Exeter”:

“Near an open field between two houses, the Thing, as he called it, came out of the sky directly toward him. It was as big as or bigger than a house. It appeared to be 80 to 90 feet in diameter, with brilliant, pulsating red lights around an apparent rim. It wobbled, yawed, and floated toward him. It made no noise whatever. When it seemed as if it was going to hit him, he dove down on the shallow shoulder of the road. Then the object appeared to back off slowly, and hovered directly over the roof of one of the houses.”

The house Fuller described here had been the Dining farm, and since the residents were gone at that time, Muscarello’s frantic pounding on the door went unnoticed. In a panic, he watched for the strange flying object, and darted back toward the road in time to see the headlights of an oncoming car. More afraid of whether the object might come back that the dangers presented by oncoming traffic, the teenager ran out into the road and waved his arms, causing the oncoming driver to stop a few yards ahead of him. Muscarello asked them if they would give him a ride to the Exeter police station, which the couple in the car agreed to do.

The Exeter UFO incident wouldn’t end with Muscarello’s strange encounter; upon reaching the Exeter police station, he met officer Reginald Toland at the desk, who knew Muscarello, and believed the youth to be in genuine need of assistance based on his frightened state. Toland radioed to other officers in the area, and soon Cruiser #21 arrived, driven by officer Eugene Bertrand, who told about an incident that had occurred on his patrol earlier that evening. While traveling near the overpass on Route 101, he had encountered a parked vehicle. Stopping to see if the driver needed any assistance, the woman behind the wheel told Bertrand that she had observed a large, silent object with red lights, which followed her car for some distance before it ascended and disappeared into the sky at a remarkable speed. Now, hearing Muscarello tell of seeing a similar object or aircraft, he agreed to return with Muscarello to the area where he had observed the object earlier that evening.

As the two approached the Dining farmhouse, officer Bertrand parked the car, and seeing no sign of any unusual aircraft, he and Muscarello began walking through the field near where Muscarello had first seen the lights in the nearby woods. As the pair walked along, the sounds of dogs barking in the distance caught their attention; soon afterward, horses in the farms nearby also began to offer similar protests. Within moments, the animal sounds were accompanied by the appearance of bright red lights from the forest, and suddenly the object Muscarello had seen here earlier rose out of the woods.

Rather famously, Bertrand, a former USAF veteran from the Korean War, was described as having dropped to one knee, at which time he drew his pistol, aiming it at the approaching object. However, thinking better of the situation, Bertrand replaced his pistol in its holster, and he and Muscarello then made haste to return to the patrol car.

At this time, Bertrand radioed to other officers in the area, to which policeman David Hunt responded. He arrived shortly thereafter, and joined Bertrand and Muscarello, who were still observing the object as it appeared to rock back and forth, its red lights flashing quickly in sequence. At one point, Hunt noted that a B-47 bomber flew overhead, of which he said “there was no comparison” in terms of its likeness to the strange aircraft he had seen with Bertrand and Muscarello that evening. Upon their return to the Exeter police station, all of the men filed separate reports about their observations, after which Muscarello was returned to his home.

The famous Exeter UFO Incident is well known enough, and has undergone extensive enough re-hashing in the past already, that few would see it as worthwhile to recount again here in all its glorious details. The aforementioned book by John G. Fuller, Incident at Exeter: The Story of Unidentified Flying Objects over America Today, already did a fine job with this, putting the story “on the map” as far as famous UFO incidents of its day. And for many years thereafter, it was believed that no reasonable explanation had been offered for what Muscarello and the two officers had observed that night.

However, that changed in 2011 when skeptical researchers Joe Nickel and James McGaha offered an explanation in the November/December issue of Skeptical Inquirer that year. “As it happens, the military pilot of our team (McGaha) has actually docked with a craft like the UFO at Exeter, and he recognized the sequencing lights for what they surely were: those on a U.S. Air Force KC-97 refueling plane.” The authors further asserted that, while a military training operation had in fact occurred in the area earlier that evening, aircraft were obviously still in the sky around the time of the “UFO” sighting of officers Bertrand and Hunt, returning to the area Muscarello had first seen the object earlier that evening. “It seems quite apparent that, although the particular exercise was reportedly over, there were still planes in the sky,” Nickel wrote. “Bertrand and Hunt, in fact, witnessed a B-47 jet at about the time the UFO disappeared (Fuller 1966, 67). Perhaps it had just refueled.”

As with many similar suggestions made by Nickel and McGaha in relation to UFO incidents, this is one of the most plausible explanations for the famous Exeter UFO. Nonetheless, there are still problems with their analysis: for instance, Fuller’s book mentions on the second page of the first chapter the following about officer Bertrand’s own prior USAF experience: “Bertrand, an Air Force veteran during the Korean War, with air-to-air refueling experience on KC-97 tankers…” In other words, the very sort of aircraft Nickel and McGaha propose the witnesses had seen that night should have been easily recognizable by Bertrand, since he had worked on the very sorts of refueling operations that the training exercise that evening had been involved with.

Furthermore, there are the correspondences between the policemen and the Air Force, which followed their encounter. The two officers emphatically stated that the object, which they observed approximately 100 feet above a field, and perhaps no more than a football field’s distance from them, had hovered silently; at no time was there any noise, apart from the apparent animal disturbance caused by its presence. Numerous descriptions like these were supplied in letters the officers sent to the Air Force, but with no reply. Finally, in January 1966, a letter arrived from the Secretary of the Air Force, from Lieutenant Colonel John Spaulding, which addressed the two men’s previous complaints. However, Spaulding’s response was far from satisfactory: ”Based on additional information submitted to our UFO investigation officer, Wright-Patterson AFB, Ohio, we have been unable to identify the object you observed on September 3, 1965.” Had the object merely been a KC-97 tanker, would it not have been easy for the Air Force to determine what this aircraft was, since it had belonged to them, and was in use that very evening during one of their own training operations?

Nickel and McGaha, in response to this, noted in their article that, “Perhaps in the welter of paperwork the clue we found so significant went unseen by anyone who could fully grasp its import and who had time to devote to the case. Naturally, everything is much clearer in hindsight.”

“We believe this solves the so-called incident at Exeter,” the authors noted. However, they continue noting that, “As to the weeks of subsequent UFO reports in the vicinity, they were beyond the scope of our investigation.”

Nickel and McGaha are to be commended for working to understand the most likely explanation for what occurred on the night of the Muscarello/Bertrand sighting. However, while being the “most likely”, at least in terms of aircraft known to exist, and military operations occurring in the area at that time, does this explanation account for all the facts, and does it offer the best representation for the object as it was described by the witnesses? If anything, the “KC-97” solution may present us with even more questions, especially due to the following points of interest:

(2) All three witnesses stated they were a relatively short distance from the object, which both hovered, and produced no noise while remaining in midair

(3)The USAF was unable to offer any explanation for the incident, despite the fact that the training operation which had been underway on the night in question should have made doing so a simple procedure.

In the end, we may be no closer to understanding what was seen near Exeter, New Hampshire, on September 3, 1965. This, of course, may not prove that an exotic spaceship, piloted by “little green men” had been diving around, pursuing vehicles in the area around that time; however, based on the evidence, it does suggest that a refueling plane may not be able to account for the circumstances much better, either.