The Feral Phantom Nose-Biter of the Carolinas – Micah Hanks Reports 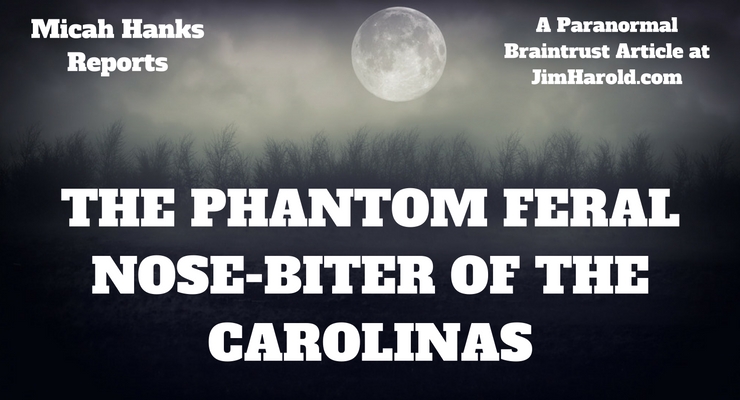 The modern world, despite what is afforded us by science and discovery, is still very much a place of mystery. To the open-minded thinker, a world of possibility exists here, where, through logic and reason, we may be able to glean new ways of understanding the nature of the physical universe.

It has been this essential credo that, for nearly two decades now, has kept me passionate about the study of the unexplained. By the time I was in my early 20s, I was writing articles on the subject of mysteries, and though my skepticism has become more focused over the years, my fundamental curiosity about unusual things remains strong. Hence, I’ve often take my interests beyond the written page and have ventured into the field, investigating odd claims that include everything from purported sightings of unidentified animals, to stories about weird things seen in the sky that seem to defy logic.

One area of interest that I’ve been less involved with is that of purported “cattle mutilations,” though this isn’t to say I’ve never had a run-in with the phenomenon (as we’ll see shortly). Beginning during the middle 1970s, reports of cattle being found drained of blood, as well as having certain soft tissues around the mouth and other areas removed, began to make headlines. Subsequent concern over this mystery led to involvement by the FBI, who have made available a number of their documents about investigations into cattle mutilations at their website, www.FBI.gov. Perhaps most alarming had been that many alleged mutilations coincided with sightings of strange lights, and hence, many began to believe that the cattle mutilation phenomenon was somehow connected with reports of UFOs over the Americas at that time.

Researcher Christopher O’Brien pointed out to me a few years ago that one of the earliest incidents involving an apparent mutilation of livestock had actually involved a horse, rather than a cow. The incident in question occurred on September 9, 1967, when Mrs. Agnes King of Alamosa, Colorado, accompanied by her son Harry, discovered the body of their horse, Lady, who’s three years old at the time of death. Lady’s curious death possessed many of the familiar tropes of future mutilations, which included removal of the skin covering the horse’s head and upper neck, along with the removal of flesh. The Kings noted the presence of what appeared to be very precise incisions, which bore cuts along lines that seemed far too controlled to have been carried out by any animal. There was no blood, and during a later interview about the incident, Harry King would state that he had smelled a strong aroma at the site of Lady’s death, which he described as “medicinal.” Law enforcement could cite “no earthly causes” for the animal’s death, which led to speculation about popular sightings of UFOs at the time. Hence, Lady’s mysterious death, preceding more popular livestock mutilations and death by nearly a decade, nonetheless became the first to associate purported extraterrestrial activity with the phenomenon.

Which brings us to my own experience with livestock mutilations. Several years ago, a news report on our local station here in Asheville, North Carolina, detailed a number of mysterious cattle deaths on a ranch in a neighboring county. Little was said about the cause of death, apart from the fact that law enforcement was investigating, and that a group of biologists, one of whom worked at the time with the Western North Carolina Nature Center, had been brought along to help determine whether the deaths might involve some kind of predator in the region.

Soon after the report had aired, I contacted a friend at the television news station, and asked if footage of the dead cattle was still available, to which I was told that the tapes had already been wiped (this was standard practice, I was told, and that the footage had not been removed for any “sinister” reasons). I then contacted the Sheriff’s Department for the county in question and inquired about their investigation, as well as the Western North Carolina Nature Center, hoping for any leads that might become available there.

Numerous queries with the aforementioned law enforcement group yielded no results. Then, within days of the initial news report on the cattle deaths, a statement was released by the department, which told a story that was almost as unusual as the initial animal deaths had been. According to law enforcement, a stakeout with the property owners over the course of three subsequent evenings led to the observation of a large, feral dog, which had been attacking the cattle late at night. The officers and property owners had allegedly observed this large dog latching onto the noses of the cattle, wrestling them to the ground and killing them in this way.

The explanation was patently absurd. No dog—feral or otherwise—would have slaughtered a cow in this way, let alone their being much possibility that such a method, had it been attempted, would have rendered a successful kill. Around this time, I was contacted by one of the biologists with the Nature Center here in town, who privately expressed some concerns to me about the case. For one, the individual (who asked not to be named) told me that the explanation involving the “nose-biting feral dog” was just as absurd as I had guessed. In order to verify this, I called a biology professor at the University of North Carolina at Asheville with whom I often corresponded around that time, who similarly expressed dismay at such a clumsy manner of killing. “A dog would never attack any kind of bovine in that way,” he told me.

However, the eerie part of the story had involved the other information provided by my contact with the Nature Center. “Micah, if I may candidly tell you something,” her email began. “There were some very peculiar incisions on the cattle we observed.” She further explained that the ears appeared to have been removed and that in her opinion, whatever the cause might have actually been, “these killings looked just like the kinds of cattle mutilations you’ve seen on the TV shows.”

There was never any clear resolution to the matter, at least as far as why area law enforcement had offered such an absurd explanation for the incident, and why this had seemingly gone unnoticed, apart from my private inquiries with the biologists at the local university and wildlife resource center named here.

Granted, there are any number of factors that might reside at the heart of this mystery. During my talk with Christopher O’Brien, he expressed his belief that the majority of these livestock deaths have an earthly cause, although he does feel that some of the mutilations could involve testing by government agencies (and yes, this sounds very conspiratorial), which might be aimed at offsetting outbreaks of such afflictions as the well known “Mad Cow Disease”, otherwise known as Bovine spongiform encephalopathy, and other similar conditions that are specific to livestock of this sort. The same general idea has been endorsed in the past by Colm Kelleher, a biochemist who has engaged in his own first-hand field investigation into cattle mutilations.

Sure, the “secret government testing” hypothesis may sound nutty to a few of us. Then again, is it any crazier than the idea of aliens abducting cattle, for purpose of carrying out their bizarre hybridization programs, as has been long supposed by much of the UFO community? Weighing our options, the secret government testing theory might make as much sense as any.

However, there was a peculiar historical thread that I found worthy of mention here too, as it relates to all of this. Absurd though the “nose-biting killer” theory had been in my own review of a cattle mutilation case local to my region, a similar solution involving a dog involved in highly unusual behavior had been attributed to a classic livestock mass-killing, which occurred in Ireland in 1874. Writing of the incident in his book Lo!, the late-great Charles Fort described the incident thusly:

“For about four months, in the year 1874, beginning upon January 8th, a killer was abroad, in Ireland. In Land and Water, March 7, 1874, a correspondent writes that he had heard of depredations by a wolf, in Ireland, where the last native wolf had been killed in the year 1712. According to him, a killer was running wild, in Cavan, slaying as many as 30 sheep in one night. There is another account, in Land and Water, March 28. Here, a correspondent writes that, in Cavan, sheep had been killed in a way that led to the belief that the marauder was not a dog. This correspondent knew of 42 instances, in three townlands, in which sheep had been similarly killed—throats cut and blood sucked, but no flesh eaten. The footprints were like a dog’s, but were long and narrow, and showed traces of strong claws. Then, in the issue of April 11th, of Land and Water, came the news that we have been expecting. The killer had been shot. It had been shot by Archdeacon Magenniss, at Lismoreville, and was only a large dog.”

Fort, in his typically skeptical manner, had thought little of the large dog explanation, apart from the contention that it was of utmost absurdity:

“This announcement ends the subject, in Land and Water. Almost anybody, anyway in the past, before suspiciousness against conventions had the development that it has today, reading these accounts down to the final one, would say—”Why, of course! It’s the way these stories always end up. Nothing to them.” But it is just the way these stories always end up that has kept me busy. Because of our experience with pseudo-endings of mysteries, or the mysterious shearing and bobbing and clipping of mysteries, I went more into this story that was said to be no longer mysterious. The large dog that was shot by the Archdeacon was sacrificed not in vain if its story shut up the minds of readers of Land and Water, and if it be desirable somewhere to shut up minds upon this earth.”

Fort’s response is hardly surprising. However, it is the similar willingness to except anything that might appear logical, so long it is of a prosaic nature, in response to the seemingly unnatural, which seems to remain constant. A large dog slitting the necks of sheep, and the subsequent exsanguination of their remains only sounds foolish, perhaps, when contrasted against the image which springs to mind as we read the description of a feral dog clinging forcibly to the snout of some poor bovine, and suffocating the poor thing.

In either instance, we may never know precisely what happened to the livestock whose lives were lost, but the death-dealers were probably not the dogs who took the blame. Recognizing this is not to endorse an “alien” theory, of course, though either attempt from such extremities of dogmatic “explanation” might be worthy of ridicule. Thus, the livestock killings, though perhaps greatly misunderstood on such ideological grounds, seem to remain mysterious nonetheless.