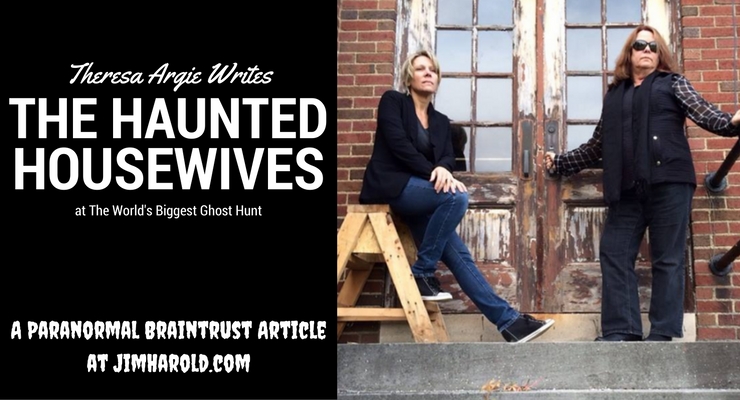 October 1st, 2016 was designated as the very first National Ghost Hunting Day. In celebration of this new holiday there was to be an event like no other – one that would reach far beyond the confines of the United States.

This was to be the night the Haunted Housewives, along with dozens of other ghost hunters, participated in The World’s Largest Ghost Hunt.

Over 70 ghost hunting teams from all over the U.S. and several European countries would simultaneously conduct a guided paranormal investigation. Each team would represent a haunted venue and live stream their entire investigation on Facebook for all the world to see. The teams were joined by participants who paid a small fee which was donated to local animal shelters.

This unusual holiday came about as an idea, a dream, that turned into reality with a lot of help from the paranormal field. The good folks at Haunted Journeys brought the idea to the powers that be at Scarefest – one of the nations largest paranormal and horror conventions held in Lexington Kentucky.

In cooperation with a multitude of ambassadors and dedicated enthusiasts, paranormal investigator Brian J. Cano (Haunted Collector, Destination America) was picked to lead the charge and organize this monumental world-wide event. His celebrity and reputation helped spread the word about WLGH.

This was no small task. Logistically, Cano had to unify hundreds of ghost hunters, haunted venues, and the curious public to pull off this complicated feat. The ghost hunt began with a bang – literally – a shotgun start at Scarfest.

The Haunted Housewives were one of the teams leading an investigation. Our chosen venue was Farnam Manor in Richfield, Ohio. Farnam is a historic gem nestled in northeast Ohio with an incredible array of paranormal activity and lively spirits. Our previous visit introduced us to the ghosts of Emily and Everett Farnam and we were anxious to return.

The Farnams’ is a tale filled with tragedy and hardship, interspersed with moments of love and happiness. The property on which they built the manor house dates back to Ohio’s earliest inhabitants. The Native American tribes that lived in the area considered it sacred. There is a special Indian marker tree on the property. This was said to guide the natives as they traversed the land.

Today Farnam Manor is a historic living museum with a paranormal reputation. Ghost hunts, lantern tours, and various gatherings are held at Farnam. It is also a fantastic venue for a brunch, bridal shower, or other “non-paranormal” type gatherings. But it is the ghosts that keep the doors open. Farnam Manor was an excellent choice for inclusion in the World’s Largest Ghost Hunt.

The night began with instructions to ask the spirits to communicate via ITC (instrumental trans-communication) using audio recorders. EVP (electronic voice phenomenon) sessions commenced simultaneously with all teams asking the same series of questions. But this was no ordinary EVP session.

Participants were asked to concentrate on the questions being directed to entities known as the Technician and Conductor on a metaphysical plane called the Timestream. (This refers to a little known paranormal experiment conducted in the early days of paranormal research.) The hope was that we would combine our efforts and communicate with these specific beings. This was a collective consciousness experiment called “The Bridge”.

Could hundreds, maybe thousands of people all thinking about the same thing at the same time have any measurable effect on a paranormal investigation? Could our combined energy, our intent, be enough to cross the veil between worlds?

In all honesty, I think attempting to connect with the Timestream was a bit vague and ambitious. I’ve been in the paranormal field for decades and was unfamiliar with the Technician or the Conductor. But I was certainly willing to try a collective consciousness experiment using Instrumental Trans-Communication.

We began our ITC session as instructed. I turned on the recorder and read the question aloud. Those that joined us eagerly gathered around and dutifully concentrated on the questions. We waited for 60 seconds before stopping and playing back the recording. My partner Cathi was also running a recorder so we had two files to review.

We repeated the series of questions twice. The EVPs we captured were amazing.

When we asked about the Timestream we did receive messages. Strange voices were captured on our digital recorders. Was it the Conductor? Did we contact one of the stations still operating on the other side? I would love to go on record and say that we cracked wide open the door between our realm and the next, that these voices were confirmation, but I cannot.

One of the questions posed to the spirits was, “How do you experience time?” We didn’t get any intelligible response to that particular question, just some low muffled sounds. But the fact that we got ANYTHING on the recorder was remarkable!

Another question was, “What do we look like to you?” Our recorder captured a low breathy voice that said “…normal people…”

The last question was, “How can we improve contact?” And in a very matter-of-fact tone the spirit answered “…you can’t…”

Well, that certainly was interesting!

Once our required line of questioning was over, we were free to conduct our own investigation. We still tried to have everyone participate and concentrate on each session en masse. The collective consciousness idea was working! We then switched our focus to the local haunted inhabitants.

The rest of the evening was filled with Ovilus and ghost box sessions. One of my favorite moments came when we asked what was the name of the family that once lived in the manor house. The ghost box proudly proclaimed “FARNAM!”

Who were we speaking with? The box said, “…Emily…”

What happened to Emily? The response was, “…drown…”
Emily was the name of Everrett Farnham’s daughter who, as a young girl, fell into a cistern and drown.

Over all we were thrilled with the results of The Bridge. Was the experiment a success due to the collective efforts of thousands of willing minds all concentrating on the same thoughts at the same time? Maybe. Or maybe the spirits were just feeling chatty.

The World’s Largest Ghosthunt was by all accounts a huge success. Many teams captured EVPs or recorded ITC sessions with answers to the provided questions. The Bridge was crossed.

The final tally of ITC sessions and EVPs are still being tabulated. Its a monumental task quantifying the submissions of each team. Hours of review and transcription is required.

2016 was the trial, the prototype of the event. Not everything went according to plans, There are kinks and technical issues that will need to be addressed next year but the idea was solid. The spirit of the experiment was honored. Everyone came out a winner.

The biggest winners of the night were the dozens of animal shelters that received the donation bounty. Another secondary benefit went to the various venues that hosted the World’s Largest Ghost Hunt; in our case Farnam Manor. This important historic site was, for one brief moment, in the national spotlight. Hopefully the publicity and awareness will translate into future visits by those in the paranormal community, which in turn will generate much needed funds. Historic preservation cannot happen without a monetary component.

Like many haunted venues, Farnam Manor is in desperate need of income to keep up with the preservation and restoration needs. Once slated for demolition, two of its former volunteers took a leap of faith and purchased the property in efforts to save it and its historic designation. Now their efforts combined with The Haunted Housewives and those involved in NGHD will make a significant difference in the future.

This is just the beginning. With any luck, the incredible results of the first National Ghost Hunting Day will fuel the fire for next year’s event. With Brian Cano at the helm and Scarefest as our mothership, we hope to see a bigger, better, more refined event in future years. With a bit of luck and a touch of tenacity The World’s Largest Ghost Hunt will spill out of the shadows and into main stream media.

National Ghost Hunting Day is long over due in my eyes, regardless of whether your believe in the paranormal or not. A day set aside to recognize the tireless pursuits of those in the field will help validate our work. In the past decade the topic of ghosts and the supernatural have gone from hushed whispers to loud proclamations.