The Men In Black: Not Smith and Jones – Nick Redfern’s “If It’s Weird It’s Here” 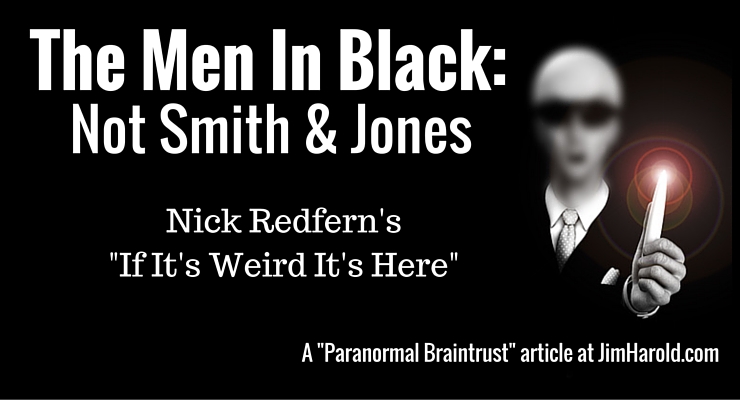 On the night of September 28, I was interviewed for 3-hours on Art Bell’s show, Midnight in the Desert. The subject of the Q&A was my new book, Men in Black: Personal Stories & Eerie Encounters. It was an interview which provoked a great deal of feedback and a number of previously unheard of encounters and confrontations with the MIB.

What I found particularly notable, however, was the fact that four of the people who contacted me after the show ended took issue with one particular matter I brought up time and again. As one of them worded it, “You stubbornly tell your readers the Men in Black are not Black-Ops.” He continued: “When you promote the Men in Black being paranormal you’re so far away from it.” “It” meaning “the truth,” I assume.

Well, no, actually, I’m not. At all. His words, however, did get me thinking about the way in which so many people interpret the MIB phenomenon. There can be absolutely no doubt that the three, phenomenally successful, Men in Black movies starring Will Smith and Tommy Lee Jones – as agents J and K – have had a major bearing on the acceptance and ongoing development of the “secret agent” aspect of the MIB puzzle.

But, the reality of the situation is that – as entertaining as the movie-versions are – the real MIB are most assuredly not agents of any official body, whether of the government, the military, the intelligence community, or even of some rogue, “shadow” group. How can I be so sure? Because that’s what the vast majority of the witnesses are telling us! And it’s the witnesses who are so important when it comes to trying to unravel the truth of the MIB.

Take, for example, the guy who kicked things off in the early 1950s: Albert Bender, a Bridgeport, Connecticut UFO researcher who established the International Flying Saucer Bureau, only to quickly close it down when he was visited by three menacing men in dark suits. But, the terrible trio were not G-Men or James Bond-types. No. They were pale-faced, grim-looking things that had brightly shining eyes, and materialized (as in literally) in Bender’s bedroom and amid an overpowering odor of sulfur.

The MIB that turned up at Point Pleasant, West Virginia in the 1960s, and when the Mothman phenomenon was at its height, were equally eerie: often short in stature and painfully thin, they were clearly unaccustomed to our ways and mannerisms. Most bizarre of all is the fact that some of them wore wigs and make-up – as if they were trying, but miserably failing, to appear more human than they really were.

Then there’s the matter of supernatural activity. I have more than a few reports on record where the MIB encounter had absolutely no UFO component to it whatsoever. Instead, the manifestation of the Men in Black was provoked by the witnesses dabbling in the worlds of Ouija boards, the occult, and Faustian pacts. In some of these cases, the witnesses experienced violent poltergeist activity in their homes after the milk-white ghouls visited them late at night.

Consider, too, the following from my Men in Black book, which comes from just one of many eyewitnesses to the MIB: “I haven’t told a lot of people about it. When I first saw the person I was about 1 or 2 years old. I have a very long memory. It was like the typical thing that you hear: it was this man who would stand in the doorway of my bedroom. I remember standing up in my crib and holding onto the bars and he wore a fedora and a tan raincoat and black trousers, shiny shoes and black leather gloves. His face wasn’t like someone who had been burned, but he just stood there and would grin. There was nothing friendly about the way he was grinning. It was horrible. Emotionless, didn’t blink. And he came off and on for a few years.

Even more bizarre – and certainly disturbing – are those cases in which people confronted by the MIB sometimes feel as if the dark-suited things are draining them of their self-will, and of nothing less than their life-force. We’re talking about vampires of the energy-sucking kind. And, of course, the pale skin and cadaverous appearances of the MIB are very apt when it comes to the issue of vampires. More than a few eyewitnesses to the Men in Black have told me they felt dizzy, very weak, clammy, and light-headed in their presence. Not unlike the situation that can occur when the blood-sugar of a diabetic plummets.

Then there’s the matter of not just the MIB but of their cars, too. Typically, they are of an old 1950s style, very often a black Cadillac. But the apparent age of the cars is not the strangest thing about them. I have many cases on file where the cars of the Men in Black vanished into oblivion. We’re talking about fading away, dematerializing, or becoming invisible: take your pick. In these particular cases, it’s almost as if the unfortunate souls confronted by the MIB have been plunged into some weird, altered state. Something akin to The Matrix scenario, in which reality as we perceive it is not actually as it is. In that sense, the cars may never really have existed – at least, not in the way we interpret the word “existed.”

Finally, we come to the most important issue of all. Although the Men in Black are most famous for issuing veiled – and, sometimes, not so veiled – threats, they rarely ever follow through on those threats. In fact, there are good indications that the entire experience is an ingenious and intricate ruse or game. It’s something akin to a stage-play, a bizarre piece of theater played out for the “benefit” of the witness. For some odd and unclear reason, the MIB are carefully following a precise script, one they rarely deviate from. Weirder still, the performers in this odd charade – the Men in Black, of course – barely seem self-aware. Maybe that’s because they’re not.

Whether supernatural and manipulative “Tricksters,” something of a near-unfathomable paranormal nature, alien-human hybrids, versions of the “Agents” from The Matrix, or something else, I don’t know. All I know for sure is one thing: Smith and Jones’ J and K they’re not.