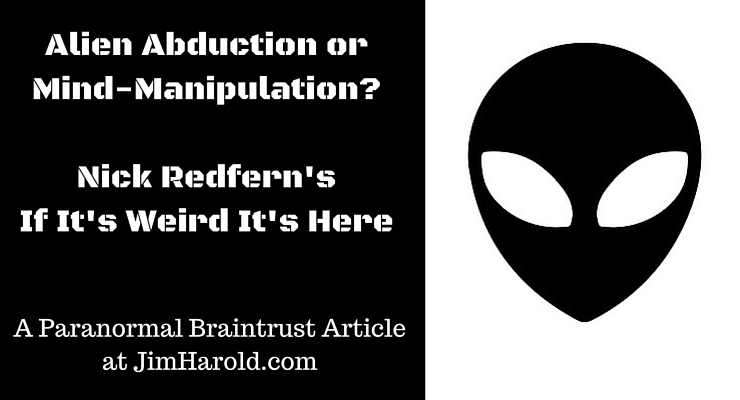 What if one of Ufology’s most cherished cases turned out to be something very different? Something far more down to earth, but of a distinctly conspiratorial nature. Yep, I can see the daggers being drawn already. Too bad for the belief-driven. There’s nothing worse than a mind made up. And there’s nothing better than shaking things up and addressing alternative theories when it comes to the matter of UFOs. After all, none of us really know what the truth is, when it comes to the UFO phenomenon. So, thinking outside of the box is vital. All of which brings us to a certain, famous UFO event of late 1973.

On the night of October 10, 1973, two men – Charles Hickson and Calvin Parker – were fishing on the banks of Mississippi’s Pascagoula River. All was going fine. That is, until approximately 9:00 p.m. rolled around. That’s when all hell broke loose. Yet, it all began relatively calmly. It didn’t stay that way, however. As they fished, Parker and Hickson suddenly noticed a light in the distance. Not only that, it was following the river and appeared to be coming in their direction. Which was not necessarily a good thing.

As the light got closer, they could see it in its full glory: the light was actually a brightly lit, somewhat egg-shaped craft, from which came a deep, throbbing hum. Such was the intensity of the hum, it provoked intense nausea in both men. Confusion, and a sense of distinct unreality, quickly followed. The pair watched in horror and amazement as what was described as a “hatch” opened and a trio of very strange-looking creatures exited the hovering object. Even stranger, and much more unnerving, the three things floated from the craft, across the waters of the river, and towards Hickson and Parker.

The aliens were not of the famous large-headed, black-eyed, and dwarfish kind, however. They weren’t even of the benevolent-looking, so-called “Space Brothers” variety of the 1950s. Nope, this particular breed of E.T. was described later by the shocked and undeniably traumatized men as being humanoid, and with faces that appeared to be almost masked, and heads from which three carrot-style points protruded. On top of that, they had large crab-like or lobster-like claws.

Then matters got even worse: when the things from another world were practically on top of terrified Parker and Hickson, both men were rendered into a state of paralysis. Whether due to some technology of the aliens, or provoked by overwhelming fear, remains unknown. Maybe it was a combination of both. Suddenly, the entities seized the pair, who were manhandled onto the UFO. Like most abductees, Hickson and Parker were quickly reduced to the equivalents of lab rats. When the trauma-filled encounter was over, the pair was dumped back on the edge of the river.

The story, hardly surprisingly, became a UFO classic, and in quick time too. The media was soon on the case. As was the military. While Parker chose to keep out of the limelight, Hickson went on to write a book about his experience (UFO Contact at Pascagoula, co-written with William Mendez), and spoke about it on the lecture circuit. But, were the pair really abducted by aliens? Or, could something have occurred that was, in many ways, even stranger? Let’s see.

It’s a seldom discussed fact that only a handful of miles from where Parker and Hickson were “abducted by aliens” is a stretch of land called Horn Island. As one might expect, it’s a tranquil place, with clean sands, marshes, and a wide variety of birds, such as pelicans and herons. There are more than a few alligators, too. But, there’s something more about Horn Island that’s worth noting. In the latter stages of the Second World War, the military explored the possibility of using Horn Island as a place where both chemical- and biological-warfare research could be undertaken. The U.S. Army’s Chemical Corps did likewise in the early 1950s – specifically when its research into so-called “mind-control” and mind-manipulation drugs was taking off. We’re talking about work associated with the notorious MKUltra program.

The official line is that the research was cancelled, due to one quite understandable reason: with Horn Island being significantly windy at times, having mind-altering, aerosol-based cocktails affecting the local populace would most assuredly not have been a good thing! However, a different story comes from some of the people that call the area home. There are tales of covert operations and experiments into mind-manipulation that, apparently, did go ahead; many under the auspices of the aforementioned MKUltra, and as late as the early 1970s. In terms of what may have specifically been used in these operations, fingers point in the direction of BZ. Or, to give it its correct name: 3-quinuclidinyl benzilate. It’s most well-known name is “Buzz.” I hardly need to explain why. The nickname nails it. For more information, see H.P. Albarelli, Jr.’s book, A Terrible Mistake.

BZ, an extremely powerful hallucinogen, can provoke imagery of an incredibly graphic nature, very often of a highly frightening nature. On other occasions, the experience can even be uplifting. As is also so often the case with LSD, it’s the setting, the scene, and the mood that typically influence the nature of the BZ experience. The National Academy of Sciences notes that BZ “was investigated as a potential incapacitating agent for military applications,” adding that it produces “anticholinergic delirium, a non-specific syndrome of cognitive dysfunction, hallucinations, and inability to perform tasks…”

And let’s not forget that Horn Island is barely eight miles from where Calvin Parker and Charles Hickson were taken in October 1973. Might the “UFO” actually have been a helicopter? Could the references to the aliens having mask-like faces, and clawed hands, actually have down to earth explanations: full-body protection suits, helmets, and thick gloves, worn by the abductors and seen by two men rendered into states of mind in which hallucinations were running wild?

It’s worth noting this is not the first time such a story has surfaced. Back in the late 1970s long-time UFO researcher Rich Reynolds was given a very similar story regarding the equally famous abduction of a Brazilian farmer (and later a lawyer), Antonio Villas Boas. Rich’s source: a man named Bosco Nedelcovic, who we will return to very soon.

It was on February 22, 1958 that Villas Boas prepared for a Dr. Olavo Fontes – both a respected gastroenterologist at the National School of Medicine in Rio de Janeiro and a highly dedicated flying saucer investigator – a remarkable, and undeniably sensational, document that told of his, Villas Boas’, close encounter with an alien only eight days earlier. But, this was no sterile “take me to your leader”-style experience involving bug-eyed, spindly creatures. According to the twenty-three-year-old farmer, he went where, quite possibly, no man had ever gone before. So Villas Boas told Fontes, he did nothing less than get it on with a hot babe from the great and mysterious beyond. And aboard a UFO, no less.

That question brings us back to Bosco Nedelcovic. Now dead, he was a Yugoslavian who worked, in South America, for an outfit that ultimately became the U.S. Agency for International Development (USAID). Rather notably, Nedelcovic later worked with the Department of Defense, as well on as a 1960s CIA operation to infiltrate the Washington, D.C.-based Institute for Policy Studies. The IPS is a think-tank which, at the time, was heavily involved in promoting civil-rights matters and the anti-Vietnam War movement.

Nedelcovic detailed for Rich Reynolds a scenario near-identical to that which I have suggested Parker and Hickson may have found themselves in. Namely, that of Villas Boas being exposed to hallucinogenic substances, taken on-board a helicopter, and then plunged into the heart of a faked alien encounter.

Rich says: “The story from Nedelcovic was that after Villas Boas had been subjected to various drugs, the part with the woman was literally acted out. So, there may have been a real woman. But in Villas Boas’ case, it could have been manipulation-induced. It gave me visions of the CIA employing people of an Asian-kind of demeanor and look. It’s in the realm of possibility that someone was concocting a scenario in that way.”

Interestingly, Nedolcovic told Rich that “…the men were participating in new forms of psychological testing that would eventually be used in military contexts.”

While many ufologists champion the Villas Boas affair, let’s take a look at what the man himself actually said about the “UFO” onto which he was taken. And, bear in mind, these are Villas Boas’ words. They are not mine. The craft was, he recalled, “…like a large elongated egg…on the upper part of the machine there was something which was revolving at great speed and also giving off a powerful reddish light.”

It rose “…slowly into the air until it had reached a height of some 30 to 50 meters…The whirring noise of the air being displaced became much more intense and the revolving dish began to turn at a fearful speed…At that moment, the machine suddenly changed direction, with an abrupt movement, making a louder noise, a sort of ‘beat.’”

So, we have an elongated, egg-like craft – not a flying saucer. It sounds not unlike a helicopter with a bulbous front. There was something atop the object which was “revolving at great speed.” Rotor-blades, perhaps? And, there was the noise coming from the craft: “a sort of beat.” Put all of those issues together and what we have is a classic description of a helicopter.

Is it possible that, for decades, new and revolutionary mind-altering substances have been utilized and tested – specifically undercover of a “UFO camouflage” – to determine just how extensively the human mind can be manipulated? It may not be what whole swathes of the UFO research community want to hear. But, that’s just too bad.