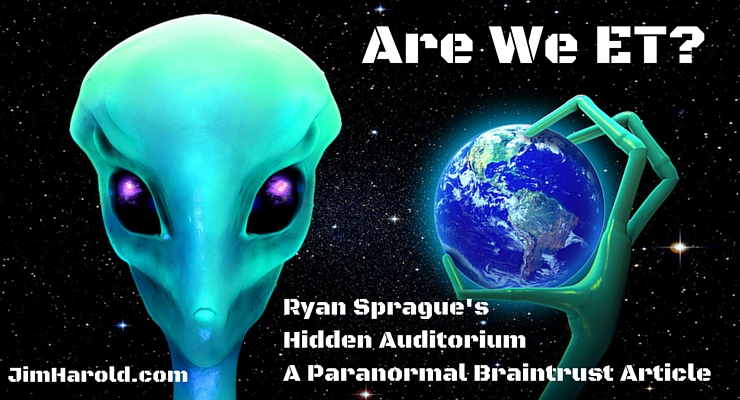 Who are they and where do they come from?

Two of the most profound questions we find ourselves pondering when dealing with the UFO phenomenon. The often elusive nature of these mysterious objects, the almost mystical interactions with supposed extraterrestrials, and even the reports of abductions by non-human entities leave us wondering how in the world anything like this could ever be the work of humans. We then find ourselves searching the skies for many of the answers to these deeply complex inquires. But could the answers we seek actually be closer than we think? When we begin to move away from the magical and mystical, we see that maybe science, in all its methodical and unforgiving glory, could bring about proof that aliens do not only exist, but that we may be the aliens we seek.

A Feeling of Alienation

In his recent book, Humans are not from Earth: A Scientific Evaluation of the Evidence, noted ecologist, Dr. Ellis Silver, makes a rather controversial argument that human physiology could perhaps show signs that it isn’t suited properly for this blue planet we call home. Comparing us as human beings to that of most animals on the planet, Silver also says, in an interview with Yahoo! News, that “Lizards can sunbathe for as long as they like, and many of them do. We can just about get away with it for a week or two. But day after day in the sun? Forget it. You might as well just lie down on the freeway and wait for a bus to hit you.”

Going into greater detail, Silver also says that human beings have vastly more chronic illness than that of other mammals. “Indeed, if you can find a single person who is 100% fit and healthy and not suffering from some condition or disorder, I would be extremely surprised.” He also theorizes that because most adults seem to have bad backs or signs of onset scoliosis, this could be an indicator that humans may have evolved on a planet with much lower gravity.

Perhaps his most intriguing theory is that we innately feel almost prisoners to our own world. “There’s a prevailing feeling among many people that they don’t belong here or that something just isn’t right,” Silver continues. “One reason for this, is that the Earth might be a prison planet, since we seem to be a naturally violent species, and we’re here until we learn to behave ourselves.” This is a very interesting theory, and one I personally glean with a skeptical lens. Could there perhaps be a similar race of human-like beings, watching us from afar, shaking their heads at us as we kill, rape, and torture one another? Is this a penal colony of cosmic proportions? Maybe we should begin to entertain the possibility that we are being watched not by big brother in the form of three letter agencies here on Earth, but a perhaps by a galactic federation somewhere beyond the stars.

[clickToTweet tweet=”Ryan Sprague asks, Are We ET?” quote=”Ryan Sprague asks, ‘Are We ET?'”]So the real question is, does Silver have any proof to back up the sweeping claims above? “Recent scientific reports suggest that life itself might not be from Earth,” he explains. “…but might have arrived here on meteors or comets. This primitive form of life then evolved over billions of years into what we find on the earth today. My thesis proposes that mankind did not evolve from that particular strain of life, but evolved elsewhere and was transported to Earth (as fully evolved Homo sapiens) between 60,000 and 200,000 years ago.” Here we have one person’s opinion that we may in fact be alien to our own planet. But is there actual scientific evidence,  as Silver suggests, that we stem from somewhere else? It’s actually much more possible than we may think.

“Seeds everywhere.” This is the literal translation of the Greek word panspermia. It states that the seeds of life on Earth exist all over the universe and can be propagated through space. These seeds are mechanisms that include the deflection of interstellar dust by solar radiation pressure and extremophile micro-organisms traveling through space within asteroids, meteorites, and comets. There are several forms of panspermia such as Lithopanspermia (from one solar system to another) or Ballistic Panspermia (from one planet to another). This idea does not set out to explain evolution or the origin of life in the Universe, but it attempts solely to solve the mystery of the origins of life on Earth and the potential transfer of life throughout the Universe.

We see the first variations of this concept through the writings of the Greek philosopher, Anaxagoras, somewhere around 500 BC. Although it differs from what we consider panspermia today, it still remains relevant in terms of this ambitious way of thinking. Anaxagoras states that “All things have existed from the beginning. But originally they existed in infinitesimally small fragments of themselves, endless in number and inextricably combined. All things existed in this mass, but in a confused and indistinguishable form. There were the seeds (spermata) or miniatures of wheat and flesh and gold in the primitive mixture; but these parts, of like nature with their wholes, had to be eliminated from the complex mass before they could receive a definite name and character.”

The theory of panspermia was then touched on in the writings of French diplomat and natural historian, Benoit de Maillet. In 1743, de Maillet wrote that he believed life on Earth was seeded by germs in space that had descended to the oceans rather than ascending from abiogenesis (living cells emerging from chemical evolution on Earth.) Panspermia continued to theoretically evolve throughout the nineteenth century by many scientists such as Jons Jacob Berzelius and Hermann von Helmholtz. Then, in 1973, Nobel Prize winning molecular biologist, physicist, and neuroscientist, Francis Crick (along with British chemist, Leslie Orgel), brought forth the even more ambitious theory of directed panspermia, which consists of possible deliberate transport of microorganisms in space to planets that have no life whatsoever. Perhaps most ambitious in their theories is that an extraterrestrial civilization may have been responsible for our seeding on Earth.

As the theories on panspermia continued to evolve throughout the scientific community, it soon became clear that the official space program had to weigh in on the topic. This is when NASA eventually got involved. Dr. Michael Callahan, of NASA’s Goddard Space Flight Center, once stated that: “People have been discovering components of DNA in meteorites since the 1960’s, but researchers were unsure whether they were really created in space or if instead they came from contamination by terrestrial life.”

But as time progressed, Callahan, along with other astronomers were able to deduce that the building blocks of life were most likely created in space. This discovery came on the tail end of evidence that suggests that the chemistry inside meteorites is capable of producing biological molecules. Therefore, it is also likely that the molecular structure of life on Earth could have been chemically created outside of the planet, and then were seeded when certain asteroids or meteorites crash landed on the planet itself.

Martian in the Mirror

So while many theorize that earth-based life could have potentially started in space, what about the possibility that it perhaps started on another planet? This is one theory brought to the table by chemist, Steven Benner, one of the leading experts on the origins of life. Benner postulates that because meteorites stemming from the planet Mars contain boron and molybdenum, these could be precursors to the formation of RNA, which is in essence, a molecule that takes on many biological roles, including expression, regulation, coding, and decoding of human genes.

Benner’s theories are strengthened by the work of Elizabeth Hausrath and Christopher Adcock, researchers from the University of Nevada. They discovered that Martian meteorites also contained phosphates, which is another vital chemical in the formation of RNA and DNA. They also discovered that proteins in these meteorites are vastly more water-soluble than proteins seen on Earth. They have deduced that since life supposedly began in the presence of water, Mars could have perhaps formed life much more efficiently than on Earth.

While the ambitious claims of Dr. Silver, Dr. Callahan, Elizabeth Hausrath, and Christopher Adcock are enticing, there simply isn’t irrefutable evidence to back up their claims to a point of certainty. But their theories remain in a hopeful state of evolution, resting on the shoulders of the many panspermia theorists before them. Only time will truly tell as we move forward in our exploration of both Mars and the many other planets within our reach.

The explosive budget increase in NASA missions to explore these planets could give us further insight into the possibility that we may have stemmed from somewhere other than this blue, rocky planet we call home. As we draw closer to manned missions to these potential planets, this could unlock many mysteries not only to the universe itself, but where we may lay in the cosmic agenda we call life. The potential to travel from planet to planet was once thought fantasy and science fiction. But as we’ve seen throughout the panspermia timetable, everything we once thought science fiction could slowly, but surely be turning to science fact.

Ryan Sprague is a professional playwright & screenwriter in New York City. He is also an investigative journalist, focusing on the topic of UFOs. He is the author of the upcoming book, “Somewhere in the Skies: A Human Approach to an Alien Phenomenon”, published by Richard Dolan Press. He co-hosts the podcasts, Into the Fray and UFOmodPod, both available on iTunes. His other work can be found at: somewhereintheskies.com